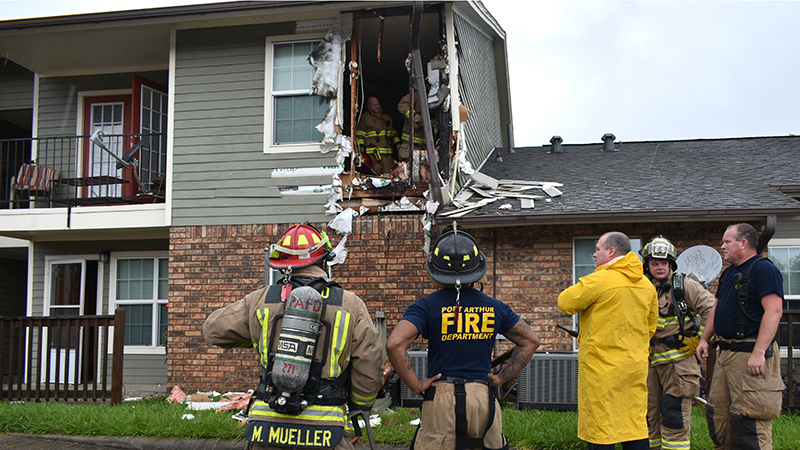 Port Arthur firefighters chop through a wall after lightning struck a unit at Heatherbook Apartments in May 2020. (Mary Meaux/The News)

Caregiver Patrina Kemper was sitting on the couch and her client, Betty Stevens, was in her chair when a bolt of lightning struck the apartment unit above, sending smoke into the downstairs residence at Heatherbook Apartments Friday morning.

“I was there when it happened,” Kemper said. “Boom. Like a cannon ball, and I kept smelling smoke.”

Kemper got up to see what happened and noticed the smoke, which kept getting thicker. She learned that the Port Arthur Fire Department had been called but made a 911 call herself, fearing for her and her client. 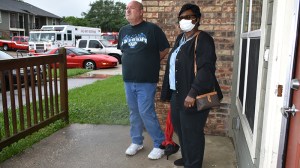 Joseph Stevens, left, and his mother’s caregiver, Patrina Kemper, watch as firefighters extinguish a fire in a unit at Heatherbook Apartments.

Betty Stevens’ son, Joseph Stevens, arrived at the scene shortly after and they later stood together near the apartment and out of the rain while watching the firefighters.

Joseph Steven said his mother was OK and at that time was in an ambulance receiving oxygen.

Deputy Fire Marshal Antonio Mitchell confirmed the upstairs apartment unit was struck by lightning but the fire didn’t appear to have reached the attic.

The call came in at approximately 10:25 a.m. at the apartments in the 7900 block of Heatherbrook Trail in Port Arthur.

Authorities said there were not initial reports of injuries.