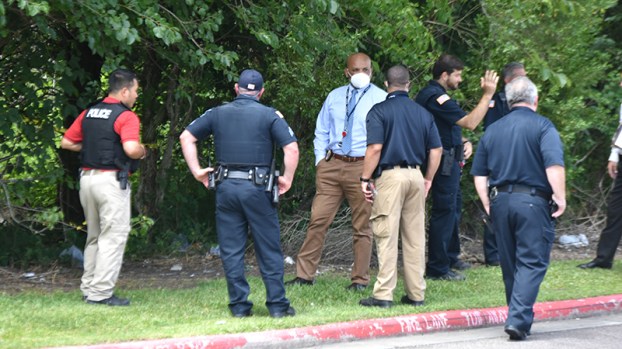 A 33-year-old woman is in custody, charged with murder after a man was found dead Wednesday afternoon in Port Arthur.

Port Arthur Dispatch first received a report of an unresponsive person in a wooded area in the 5000 block of Twin City Highway at approximately 12:54 p.m. Wednesday.

Arriving officers to the scene located a male, who was deceased.

Guedry said the victim “sustained injuries during an altercation that investigators believe led to his death.”

An autopsy has been ordered to determine the cause of death, and police said the identity of the victim will not be released until next-of-kin is notified.

PAPD Chief Tim Duriso, along with a number of officers and ID technicians, were at the scene Wednesday afternoon and yellow crime scene tape marked off a section of the roadway leading to Walmart.

Bystanders parked and gathered across from the scene in the shopping strip nearby, periodically asking officers for updates.

Jefferson County Pct. 2 Justice of the Peace Marc DeRouen was also on scene, presumably to pronounce the person deceased.

Several people who described themselves as homeless were heard saying they knew “who killed him.”

A 33-year-old woman is in custody, charged with murder after a man was found dead Wednesday afternoon in Port Arthur.... read more