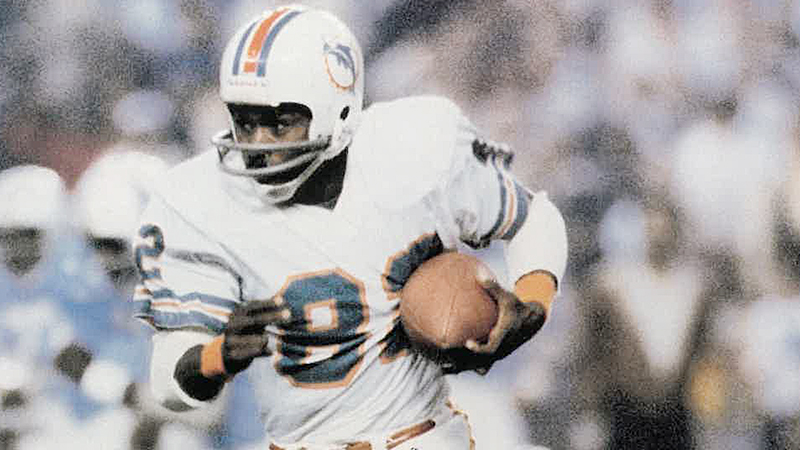 Durial Harris played for the Miami Dolphins under legendary coach Don Shula from 1976 to 1984. (Courtesy photo)

Duriel Harris’ favorite quote about Don Shula, who set the NFL’s record for the most career wins as a coach, came from fellow Southeast Texas native and football legend Bum Phillips.

Coach Phillips said, “Don Shula can take his’n and beat you’n, and he could take you’n and beat his’n.”

Harris saw just how Shula managed to earn his lofty reputation during his time playing for the Miami Dolphins from 1976 to 1984. Harris was there when the Dolphins played the Washington Redskins in Super Bowl XVII in 1983, and even played against Lincoln High School graduate Joe Washington Jr., who was a running back for the Redskins. The Dolphins lost 27-17.

It was Shula that turned Harris, a wide receiver from New Mexico State University that had graduated from Stephen F. Austin High School in Port Arthur, into a professional football player. 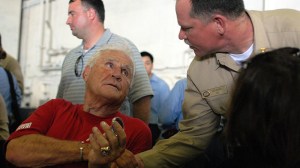 “I have him to thank for that because he took the time to really explain it to me that they expected a lot in practice out of me,” Harris said.

“I became a more disciplined player and a more disciplined wide receiver. Coming out of college, I basically ran away from people, and I didn’t have to work as hard in practice. Once I got to Miami, Coach Shula pointed that out to me. Prior to that, I just never placed a lot of emphasis on practice, but he would tell me that if I practice and put the work in, it’s going to be so much easier, and I’m going to get better, which I did.”

Shula died Monday in Biscayne Bay, Fla., not far from downtown Miami, at the age of 90. Shula won a total of 347 games, coached in six Super Bowls and pulled off the NFL’s only perfect season with the 1972 Miami Dolphins, who had a record of 17-0.

For Harris, who was drafted to the team in 1976, perfection was what Shula demanded from his team.

He recalls running batches of “perfect plays” during practice, a set of plays that each had to be run in sequence with no mistakes before the team could move on.

If, on play eight, someone jumped offsides, fumbled or blew an assignment, the team started over again with play one.

Harris believes these drills helped the Dolphins of the Shula era become one of the least penalized teams in the NFL.

“He said we can do this in 15 minutes or two hours, it’s up to us,” Harris said. “I tell you, during that section of perfect plays, that’s the most intense the guys ever were. Everybody had their antennas up. As a receiver, I’m at the end, and I’m a young guy that didn’t want the veterans to be mad at me, so I would watch and wait until the ball was actually being snapped before I would take off, just because I didn’t want to jump offsides. That’s how much respect you have for him and your peers.”

Shula expected his players to be in the best shape possible, and that meant running gasser drills in the South Florida heat, where players ran back and forth from sideline to sideline.

“We could run about four or five of those, but afterwards you’d be so tired,” Harris said. “He told us that he was never going to let anybody outwork his team. We were going to be in great shape. If they beat us they were going to be a better team, but we were not going to give it to them. That’s what he stressed, and we were one of the better teams in shape.”

Shula’s style of coaching differed greatly from Tom Landry, longtime head coach of the Dallas Cowboys. Harris joined the Cowboys briefly in 1984, but was cut the next year. Whereas Landry would stay on the sidelines during practice, barking orders through a bullhorn or megaphone, Shula was often right there in the huddle instructing players, Harris noticed.

“Coach Shula was dressed in shorts and a tee shirt, and when practice was over, he was just as sweaty as the guys because he was just as involved, running around back and forth from offense to defense,” Harris said.

With such high standards, Harris found it wasn’t always easy to impress Shula.

“You could do something for someone else and they might be jumping up and down, but Coach Shula would say “Great job” and never show that emotion,” he said. “Every once in a while I was fortunate to make a great catch and a big play, and Coach Shula would maybe give me a hug or something extra special. That made me feel good. That reaction I got from him meant a lot because he broke the norm.

“The flipside of that was, when you made a mistake, as you’d come off the field you wanted to go as far away from him as you could so he wouldn’t bite your head off.”

Shula left an enormous impression on Harris, and helped him mature as a player.

“It was a great experience, and I feel blessed and fortunate to play and also learn from one of the greatest coaches of all time,” Harris said. “When I came out of New Mexico State, I was only 20 years old and didn’t turn 21 until about midway through the season. I was really a kid playing with adults, and Shula really helped me make that transition. I grew up fast.”