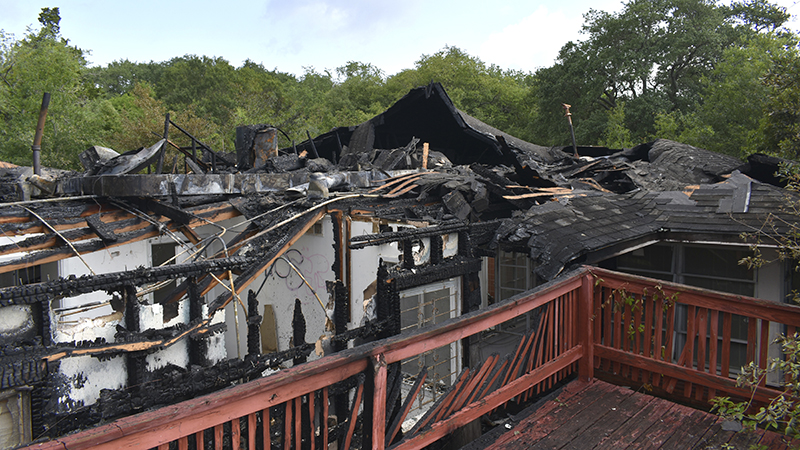 A vacant home at 101 Gifford Pond Drive was destroyed by fire Monday night. Officials believe the fire started on the outside of the home, went up a wall and into the attic and roof. (Mary Meaux/The News)

Fire destroyed a once well known home at 101 Gifford Pond Drive Monday night, but a future exists for the property.

The home, long vacant, was once the home of the Gifford Pond family, who owned Greenlawn Memorial Park.

A private road off Procter Street leads down the oak tree-lined drive where sprawling branches make a canopy rich in greenery.

A wrought iron fence with brick pillars denotes the property boundaries, and an iron sign tells visitors this is “Evergreen Acres.” 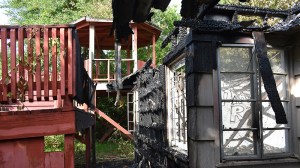 An area between the main house at 1010 Gifford Pond Drive and a set of steps and elevated gazebo show extensive fire damage.

The curb-lined street dead-ends into the Seawall where, from a higher viewpoint, one can watch ships traverse the waterway with a glimpse of Pleasure Island. The actual address for the home is 101 Sixth Ave.

Port Arthur Fire Marshal Paul Washburn said there were several calls about the fire that came in at approximately 6:32 p.m. Monday, and the fire appeared to have started outside the home. There were no utilities or power to the house, as it had been vacant, authorities said.

It is not known at this time if the fire was intentionally set or accidentally, Washburn said.

“It started on the outside, burned up the wall and got into the attic,” he said. “Once it was in the attic, it burned most of the roof of the house.”

The house had been “red tagged” for demolition by the City of Port Arthur and is a total loss due to the extent of the damage. 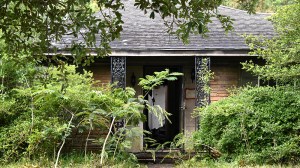 Damage from Monday night’s fire at 101 Gifford Pond Drive is barely visible from the front.

Legacy has been working with the city on affordable housing on the property, but plans have now changed a bit. Originally she hoped to renovate and repair the 3,200-square foot home, but due to the severity of the damage, the house will be bulldozed as Legacy moves forward with plans to develop 12 homes with mixed market prices in that area.

If funding is received by the city, then Legacy would have to blend affordable housing and market price. If it does not receive city funding, there is no requirement for a price range. 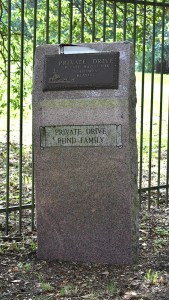 The current homes Legacy is involved with in downtown Port Arthur top out at $165,000 and are affordable custom homes.

Should there be mixed price homes, they would range from about $165,000 to $250,000 and be somewhat larger than other homes they’ve constructed.

“There is a need for housing,” Ballou said. “We have affordable housing on one end of the city and higher end housing on the golf courses. There’s nothing in the middle for the everyday working family that’s affordable for teachers, principals, city workers.”

Ballou said Legacy is looking at about a one-year timeline so infrastructure can be added, such as streets, water and sewer services. 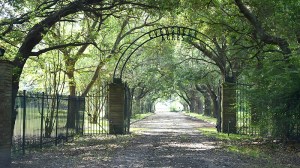 “With this (fire) happening, it sort of pushes the project faster. Now we have to move toward demolition,” she said.