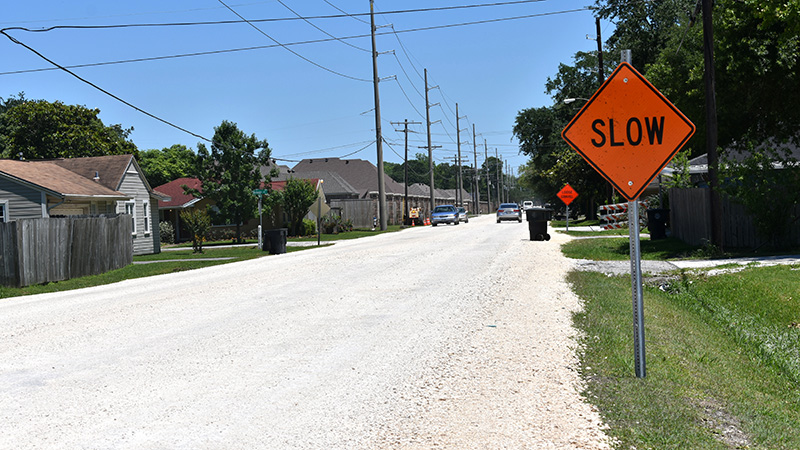 Monroe Street in Groves from Twin City Highway to Main Avenue is getting a makeover as part of the city’s 2020 Street Program. (Mary Meaux/The News)

GROVES — Work continues to rebuild Monroe Street in Groves from the bottom up as part of the 2020 Street Program.

City Manager D.E. Sosa said work began in early April and there was a setback with a hold-up on materials, but all has since returned to schedule.

Currently, the near one-mile section of roadway, from Twin City Highway to Main Avenue, has rock on it, and the next step is for a reclaimer or BOMAG machine to establish a new base for the busy roadway.

It will have a seal coat in the first year after the street is completed and in the next year after it will be asphalted, Sosa said.

There are fewer vehicles on local streets at this time, which is a positive for the construction.

“Doing it at this point in time with the ‘Stay at Home’ request has helped out because it’s keeping traffic at a minimum, and we are trying to get as much of the base and rehab work done as we can,” Sosa said.

City leaders have not heard of any issues from Groves residents about the roadwork, Sosa said.

Monroe is one of a number of streets to see some sort of repair or rehab from now until the end of the summer.

Crews hope to complete the first phase of the work before the end of the summer then come back next year for the second phase, or asphalting, Troy Foxworth, public works director said.

In addition, there are a number of roads that will be fixed through funds from the Texas General Land Office.

Groves has an interlocal agreement with Jefferson County Precinct 2 for assistance with the repair of roadways, where rock will be laid after Groves does the prep work.