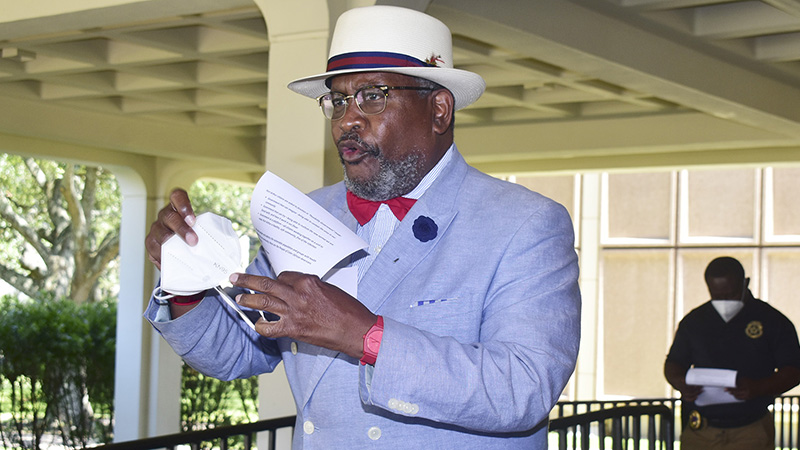 As business begins to open on a phased basis in Texas, the mayor of Port Arthur believes citizens will determine the shape of a “new normal” once the coronavirus pandemic passes by.

“If we lived in a communist society, I could tell you what the new normal is going to be,” Thurman Bartie said. “Because we’re in a democratic republic where freedom is freedom of movement and without any government encroachment — which actually had to happen because of the pandemic — once this disaster is lifted, the new normal will actually be what the individual believes and thinks is safe. If I had known I had labored breathing and wanted to go to the store and wanted to go to a game, but then I don’t know the person I’m going to be sitting next to at a game or what area I’m going to sit, or who I would be around in a store. It might be prudent that I don’t go to a game. So, the new normal for me might be to listen to a game or watch a game before I attend a game.

“The new normal will be dictated by each individual. That’s my perception of it. Again, that goes with the possibilities of government.”

Bartie petitioned citizens to function in a “Possibility Government” ideal, detailing that government can imagine being able to contain coronavirus in the community, government can try instituting a new normal and have it work in favor of citizens and that all citizens work together as a unit to make Port Arthur a healthy, safe community free from infection.

Friday was the first day that retail stores, restaurants, movie theaters, malls, museums and libraries in Texas could reopen, but only to 25 percent of the maximum capacity.

Establishments such as barbershops, hair salons, bars, bowling alleys and gymnasiums do not have the green light, but that could change if Gov. Greg Abbott allows for his reopening plan to go into a second phase by May 18.

High school and college sporting events have been canceled for the rest of the school year as a result of the pandemic, although plans for football to resume in late August have not yet been altered.

As for houses of worship, Bartie cautioned the faith community against rushing back to regular assembly, although worship is considered essential in Texas.

Many members belong to a population vulnerable to coronavirus including African Americans, Hispanics, people with low income and those 65 and older, according to the mayor.

“I was brought up in church,” said Bartie, a licensed minister. “It’s like that’s the only thing you know, which is going to church. But right now, God has blessed us where you get on your phone or get on your laptop and enjoy church and the sermon. There are some younger folk who can be there who can sing praise songs and have a service, and then you can give an offering, because all you have to do is go online.”

Despite a limited number of tests available, an alternative site for coronavirus testing will be set up at Bob Bowers Civic Center from 9 a.m.-4 p.m. Wednesday. Individuals do not have to exhibit symptoms of the novel virus, but they need to prove residency in Port Arthur and must call ahead for one of 100 available appointments at 409-550-2536.

That is the same hotline number for those with symptoms only to be screened for testing at Jack Brooks Regional Airport in Nederland.

“As this virus is studied a little more, we’re finding some of our positive cases that are recorded to us from either the testing sites or private doctors are people who are asymptomatic,” Port Arthur Health Department Director Judith Smith said. “Now, you can understand why people are encouraged to get tested.”

Smith added she is aware there will not be enough tests for everyone.

“If you are in contact with someone with underlying conditions, if you are a caregiver and you are asymptomatic, that’s a good reason to want to be tested,” she said. “That’s a good reason, really, to have a test done, because even though if you developed it, you may have mild to no symptoms. What may happen with that person who has underlying conditions could be very serious, even to the point of death.”

Smith will deliver a presentation regarding the pandemic during Port Arthur’s next city council meeting, scheduled for 11 a.m. Tuesday.

The meeting will be streamed live at portarthurtx.swagit.com/live.

Museum of the Gulf Coast finishing final prep for…