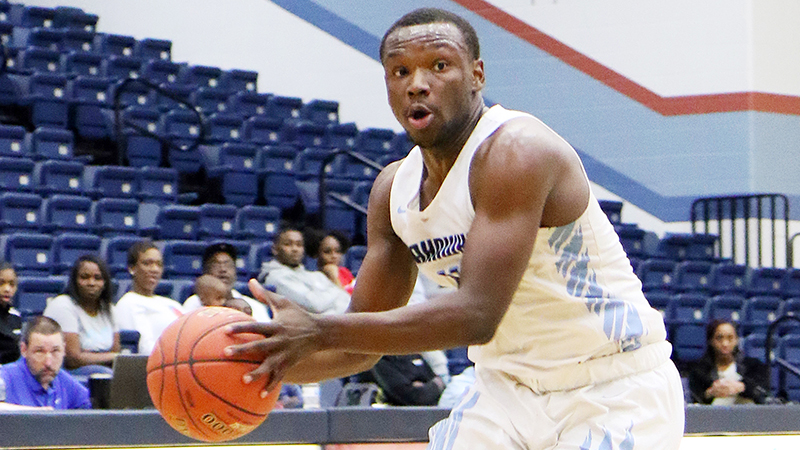 Darrell Jones, No. 11, slashes toward the bucket Jan. 15 for a Lamar State College Port Arthur two-pointer in an NJCAA Region 14 game against Coastal Bend College.

Jamyus Jones and Darrell Jones, the second- and third-leading scorers for the Lamar State College Port Arthur Seahawks last winter, are not related.

At least not biologically.

“Our dads worked together for the City of Port Arthur,” Jamyus Jones said. “We played AAU together. We’ve been knowing each other for 12 years.” 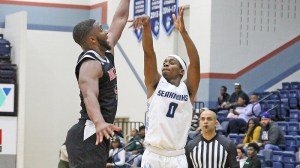 Jamyus Jones jumps high to get off a shot during a game against Baton Rouge College.

They are set to remain teammates for two more years now that they both have signed letters of intent to continue their education and play NCAA Division II basketball at Texas A&M International University in Laredo.

“I call them the Jones Boys,” said Rudy “Mac” McConnell, first-year head coach at TAMI. “They’ve got a mature attitude and character about them. They both have good parents, and they work hard.”

Jamyus Jones, a 5-foot-11 guard, was an all-stater who led Port Arthur Memorial to the Class 5A state championship in 2018. He was the only Seahawks player to play in all 64 games in the past two seasons, starting 31 of 32 as a senior.

He averaged 13.2 points and 4.3 rebounds per game, both second-best on the Seahawks in last season’s 15-17 campaign that included a first-round upset of Trinity Valley Community College in the NJCAA Region 14 tournament.

Darrell Jones, a 6-foot-2 guard who led Nederland High to the District 21-5A title as a 2017 senior, was second on the 2019-20 Seahawks in assists per game, third in steals and scoring with a 9.2 points per game average and fourth in rebounding.

He began his college career averaging 4.4 points per game as a freshman at John Brown University in Arkansas, an NAIA school. He transferred home to Port Arthur and redshirted during the 2018-19 season.

“Both Jamyus and Darrell are good players,” said Lance Madison, the Seahawks head coach. “Jamyus is a good shooter and a good scorer. He had some big games against good teams. Darrell’s mid-range game is good, and he played great defense. Against Angelina [LSCPA’s final game], he was our best player.”

Sports teams at 7,500-student Texas A&M International are known as the Dustdevils, and McConnell will be trying to dust off the program’s solid reputation that includes NCAA Division II tourney trips in 2013 and 2014.

A member of the Lone Star Conference, the basketball team was just 9-46 the past two years after the retirement of a long-time head coach.

“I’ve been known to fix bad programs and this one only won three games last year,” said McConnell, who was hired in March. “So I’m trying to find the right kids to do that. I’m looking for guys that will play hard and physical.

“Every kid needs improvement, but these two bring a lot. Both are high-character, low-maintenance products of Region 14. They both had opportunities [to play elsewhere]. I’m glad they chose to come here.”

Not only did the Jones boys grow up playing basketball together, they were like members of each other’s families.

“We used to stay at each other’s houses about each weekend,” Darrell Jones recalls.

Their decision to continue teaming up at TAMI was also a group thing.

“We both ended up getting interest from the coach, so we decided if one was going, we both were going to go,” Darrell Jones said.

“I love to play with Jamyus. He was one of my favorite teammates last year. He’s a very hard-playing player and that’s the best kind of teammate.”

“It’s a new head coach, so it’ll be a whole new team,” Jamyus Jones said. “Having Darrell there will make it much better. I’m happy for this journey. It should be fun.”