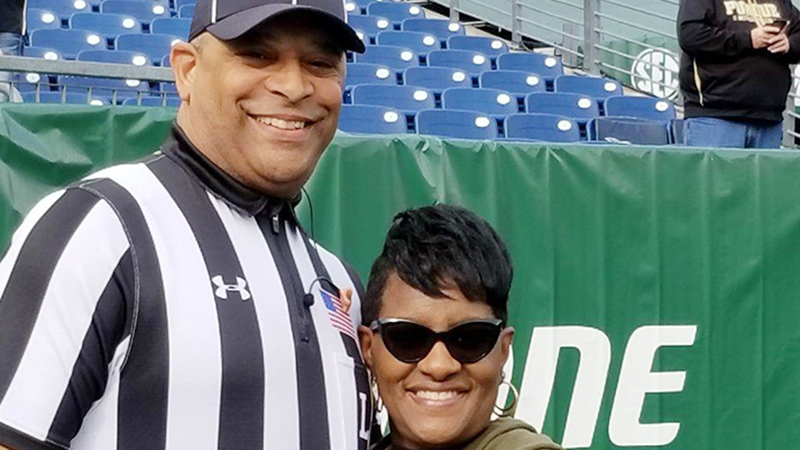 If it weren’t for Frank LeBlanc, then-Lincoln High School freshman football coach Michael Sinegal would have faced discipline from the University Interscholastic League in the early 2000s.

That’s because Sinegal was tossed from a game against West Orange-Stark.

“They were trying to embarrass us,” the present Jefferson County Precinct 3 commissioner said. “This was a Thursday and we had to play them Friday night [in a varsity game]. For some reason, [West Orange-Stark coach] Dan Hooks always had something against Lincoln. He always set the tone, even on the seventh, eighth, ninth — all the way to the 12th-grade level. After practice, he would coach the freshman game as well.”

West Orange-Stark won the game handily, but Sinegal was ejected for bumping into an official while on the field. Sinegal said the contact was unintentional, adding he only went on the field after Hooks did to protest some missed calls.

LeBlanc was part of the officiating crew that game.

“The referee was going to send it to the UIL, but Frank went to [the referee’s] car,” Sinegal said. “Frank knew my personality. I was going to protect my kids. Frank talked the referee into ignoring it. He saved my bacon that night.” 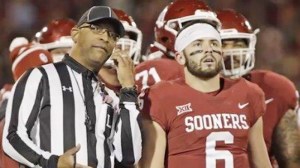 Line judge Frank LeBlanc speaks with then-Oklahoma quarterback Baker Mayfield during a game in this undated photo. Mayfield is now the quarterback of the Cleveland Browns.

That is one of many highlights in a 26-year officiating career that’s seen LeBlanc work his way from the youth ranks to a gig in the National Football League.

The Port Arthur native and 1984 Lincoln alumnus recently graduated from the NFL Officiating Development Program, which trains top college football officials for the sport’s highest league. LeBlanc spent the past 10 years working in the Big 12 Conference.

“Like I tell a lot of young officials, you just never know who’s watching,” said LeBlanc, 54, who resides in Fresno, in Fort Bend County. “Just keep doing what you’re doing and keep improving. You may never know when that chance comes. Just be ready to step into the open door when it comes. I’m really grateful, thankful and humbled by it.”

LeBlanc will serve as a down judge, meaning he is in charge of keeping up with downs and leading the chain crew. In the NFL, the down judge is formerly known as the head linesman.

He started officiating in 1994 while still living in Port Arthur and working for the Jefferson County Sheriff’s Office. He got into the field after a friend, Grant LaPoint, helped LeBlanc’s brother Robert get started in officiating.

LeBlanc worked his way through little league, middle school, sub-varsity and varsity ranks before joining the Southwestern Athletic Conference in 2001.

He began calling games in the Southland Conference — Lamar University’s league — in 2006 and started working in that conference full-time the next year under a tiered program organized by NFL referee Walt Anderson, Mountain West Conference supervisor Ken Rivera and Southland supervisor Byron Boston.

The progress would allow officials to begin in the Southland, a Football Championship Subdivision conference, graduate into the Mountain West, a lower-level Football Bowl Subdivision league, and then the power-conference Big 12.

“Walt Anderson would have a really good program,” LeBlanc said. “When we had annual camps and clinics, there would be five to seven conferences that would come. I worked several different camps to improve my skills in officiating. It’s very important now to gather officials. They have to attend these camps and clinics.”

Anderson will now work with Defee in training NFL officials.

LeBlanc spent two years in the NFL Officiating Development Program, which allowed him to work NFL practices, preseason games and a practice for the East-West Shrine Game, one of college football’s major all-star games.

“When I got involved in officiating, I was just looking for something extra to do, maybe some high-profile high school games, maybe a state championship,” LeBlanc said. “I never would have imagined of making it to the NFL.”

Now, two daughters, a granddaughter and a wife of 32 years — the former Strinda Dorsey — have a family man who works as a neighborhood services manager for the city of League City on the weekdays and will be seen on an NFL field on Sundays.

As he’s done the past 26 years, LeBlanc will be there just to do his job.

Sinegal characterized him as a quiet leader.

“I’m not one of those guys who want to wear the white hat,” he said. “That’s why I never pursued it. I’m one of those guys — not to say I’m not a leader — I guess more of a team player. I’ve never been one of the guys classified as a leader-type guy. I’m more of a role player.”