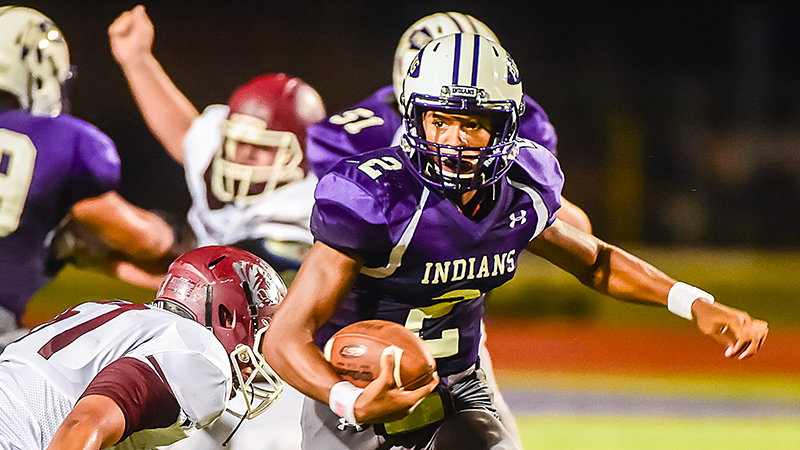 The Showdown was an online context that allowed fans to select their favorite high school football stadium out of 64 in the state in a bracket-style online voting contest held by the annual football preview magazine and TexasBob.com.

Voting for the championship round was held Friday through Monday.

“We’re extremely honored and humbled to be picked,” PNG head coach and athletic director Brandon Faircloth said. “I believe they’re right as well. It’s a credit to the students who are involved every Friday night, the band, Indianettes, twirlers, our awesome Indian Spirit and in my opinion we do have the greatest fans.

“They show up, home or away, but definitely at home. Credit to the home communities for showing up and having our back every Friday night, making it a great place to play.”

Indian Stadium seats 13,500 and has a press box and lobby area that was renovated for the 2009 season, Faircloth’s first at the helm.

The middle three sections in the home seating area are the tallest and help to elevate the two-floor press box.

Faircloth said the upgrade did not factor in his decision to come to PNG.

“At the time I applied because of the tradition, the history and the success of PNG football,” Faircloth said. “It’s been a very tradition rich program, but then I could get the job and you pull into the fieldhouse and you see the stadium. I’ve been very blessed.”

Faircloth was born and raised in Brownwood, whose Gordon Wood Stadium lost to Sanderson’s stadium in the semifinal round.

“I grew up going to games like everyone at PNG does,” Faircloth said. “That was something I was very blessed to be a part of. To be the coach at PNG is a blessing. It’s something we don’t take lightly.”

The only other Jefferson County stadium selected for the Showdown, the Beaumont ISD Stadium, lost in the first round to El Paso’s R.R. Jones Stadium, which fell to Eagle Stadium in the round of eight.

William Wilkerson, a web/social media manager for DCTF, said there was no prize associated with the contest.

“Just something fun to do during this down time,” he said.

The University Interscholastic League canceled all remaining 2019-20 spring activities and state championships. The UIL paused activities during the week of the boys basketball state finals.