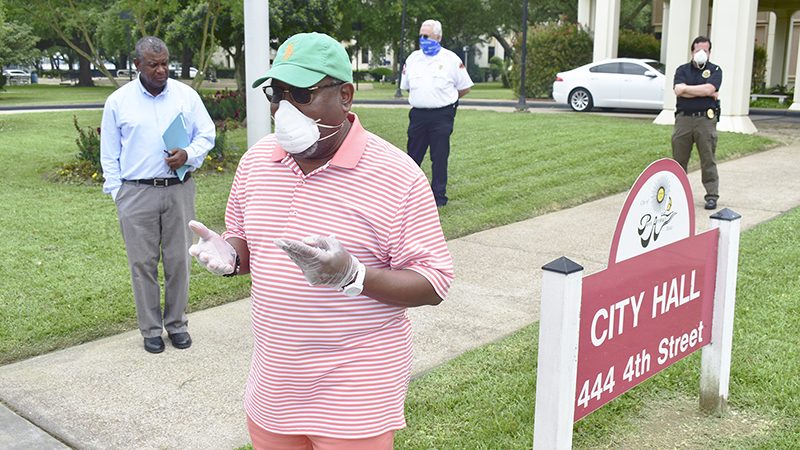 “I’m asking everyone to just wear masks, man,” Bartie said, adding masks and gloves are only suggested, not required, in Port Arthur. “Listen to the governor closely. He said what we’ve known all along: The most vulnerable people are those 65 and older. He asked that population to stay home.”

Bartie called it “a strange dichotomy” that restaurants, retail stores and many other businesses will be allowed to open (up to 25 percent of the maximum occupancy) while everyone, he believes, can be protected by staying home during the pandemic.

“I would ask citizens of Port Arthur to be prudent and use common sense,” he said.

“He was superseding more local issues on the things he’s addressing,” Branick said. “There are people on both sides of the issue. Some believe there needs to be a complete lockdown while some have said they need the economy to be reopened.”

Branick said he anticipated the measures Abbott took Monday, but felt Abbott would have allowed barbershops and hair salons to reopen as well. That won’t happen until May 18 at the earliest, if Abbott feels the fight against coronavirus allows Texas to progress to the second phase of his plan.

“I know there are a lot of people who work in barbershops and salons that were not eligible for benefits and that sort of thing,” Abbott said. “I know they are devastated.”

While Bartie’s, Branick’s and Abbott’s executive orders each call for stiff penalties if violated, it will take more self-policing from citizens to adhere to social distancing guidelines to stem the spread of coronavirus, Bartie said.

“What I do know is that we haven’t contained the virus,” Bartie said. “We had three new cases (Monday) in Port Arthur. We’ve got to use better judgment.”

“We’ve got to look at, if we don’t do this right, school won’t begin in August, which will create a very ugly monster for us,” Bartie added.

Branick acknowledged the impact the pandemic has had on the local oil industry. The “Stay at Home” precautions against COVID-19, he said, decreased the nationwide need for refined petroleum.