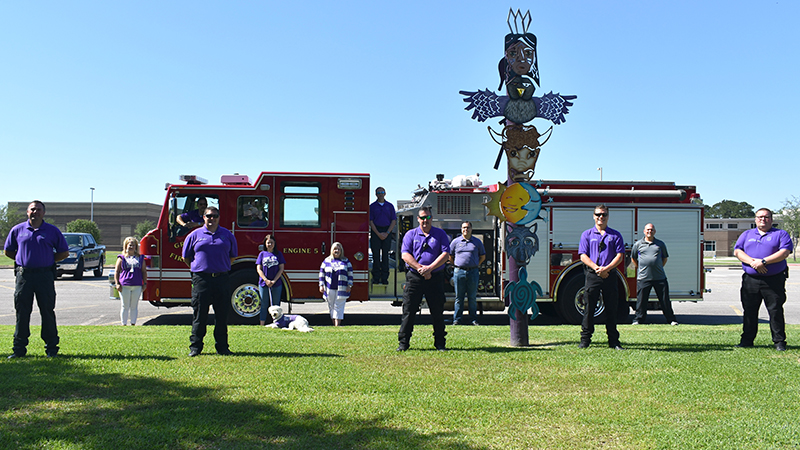 Groves firefighters, front row and back center, and Port Neches-Groves school officials met on Friday at Groves Middle School. The firefighters will be wearing purple uniform shirts on Fridays to show support of the school district. (Mary Meaux/The News)

GROVES — Groves firefighters are proudly showing their purple pride in support of the Port Neches-Groves Indians.

Fire Chief Lance Billeaud said for years the firefighters have wanted to wear purple shirts on Fridays during football season, but uniforms are usually bought in January.

Things didn’t happen as planned this year, so during a March department meeting it was decided and the uniforms were ordered for the upcoming football season. 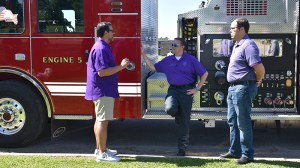 The new shirts came in and in light of all that is going on with COVID-19, the decision was made to begin wearing them this past week.

“Nothing unites the PNG community like the purple shirt,” said Billeaud, who is also a radio color commentator for the PNG Indian football.

He said they would likely continue to wear the purple uniform shirts on Fridays for the rest of the year.

Fire Captain Pete Konidis contacted PNGISD Superintendent Mike Gonzales of the purple pride and on Friday the two groups got together for a photo.

“I think this is more than just support for the district, it’s support of the community and shows we are all in this together,” Gonzales said. “And to me, it’s one of the most important. It shows we are together as a community and we all have to work to get through the issues.” 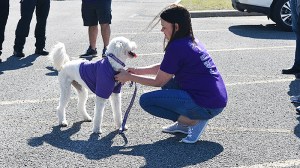 The photo opportunity was held at Groves Middle School, where the purple uniform shirt wearing firefighters met with purple wearing PNGISD administrators and officials — even Gracie the school’s therapy dog was there.

The happy “goldendoodle” dog wore a purple shirt with purple and white leash.

Groves Middle School Principal Paul Bryan said the PNG community is always supportive of one another and has outstanding parental support. He is thankful for the firefighters reaching out, saying it means a lot to him.