“So well liked”: Veillon family looks back on life taken away by coronavirus 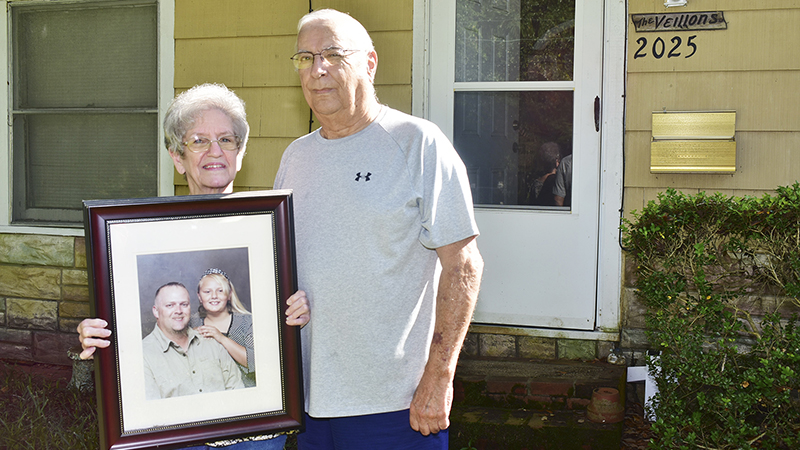 From the time John Kirk Veillon was an infant, he had a way of drawing people to him, according to his mother.

“He had blue eyes with the blonde hair. People were attracted to him,” said Cheryl Veillon, 73, of Port Arthur.

It was like a dream to Cheryl and her husband John Irving Veillon, she said, that Kirk came into their lives and became Shana’s little brother. Cheryl had also gone through three or four miscarriages.

She was interested in adding to her family after visiting a friend whose daughter was undergoing knee surgery at a hospital. 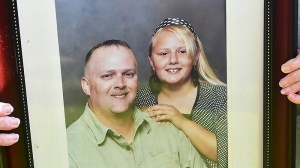 “There was a little baby in a glass window,” she said, learning the baby’s mother was 16. “A nurse told me she was feeding him Coke and Fritos.”

When Cheryl asked about adoption, she was told to call her doctor, and then her doctor told her to call a lawyer, who tracked down another mother who wanted to give her baby away.

“The end of June, he called to inform me that [Kirk] was born,” Cheryl said. “She didn’t want to be pregnant anymore, so she induced labor early. He weighed 4 or 5 pounds.”

Kirk was born June 28, 1972, and was adopted into the Veillon family nine days later.

‘So well liked, it was pitiful’

The young boy with good looks continued to grow into a well-respected person in the community, Cheryl said.

“He was so well liked, it was pitiful,” she said. “There wasn’t a person he didn’t like.”

Kirk played football at Thomas Jefferson High School and finished with a General Educational Development diploma. He went on to work for the Orange County Sheriff’s Office and made a career as an inspector in construction.

“Kaitlyn had battled mild seizures since being an infant,” John Veillon, 75, said. “The seizures got worse as she got older. She rolled off the bed on a Sunday night at her home. Her mother called 911, the ambulance got there and said, ‘We’re going to do all we can, but there’s no life in her left.’”

“It was a tragic thing, one of the most horrible things I had ever seen, to see your son just bummed and crying and Kaitlyn on a machine keeping her alive,” John said.

Her passing took an emotional toll on Kirk. 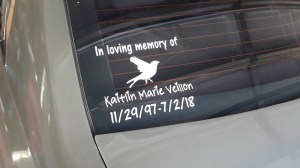 A decal in memory of Kaitlin Marie Veillon is placed on the windshield of the car her father, John Kirk Veillon, drove. (I.C. Murrell/The News) 4-21-20

Cheryl said Kirk was never the same in the nearly two years since Kaitlyn’s passing. When Kirk suffered complications of coronavirus in March, Cheryl noticed his fighting spirit was gone.

“He said, ‘Mama, Kaitlyn’s calling me,’” she said. “I think he gave up. He didn’t want to fight anymore. He wanted to go see her so bad.”

It was on a Monday, Cheryl said, when Kirk indicated he didn’t feel well and went to see a doctor. He was diagnosed with an upper respiratory infection and learned the following Friday he had contracted a virus.

Kirk’s parents took him to their home in hopes of recovery.

“He was feeling really bad,” John said. “He developed a bad cough. He went to the doctor himself. They gave him some cough medicine, he took a shot, and that helped him out. A week-and-a-half to two weeks later, he started having dry heaves. His stomach was hurting. He had real loud dry heaves. It just continued on, so I took him back to the doctor, and they gave him some little bitty tablets.”

Kirk’s condition worsened during that time. He had underlying conditions including diabetes.

Then one Sunday afternoon at about 4:30, Kirk was rushed to the emergency room.

Due to precautions against COVID-19, his parents were not allowed to ride in the ambulance with him.

He requested to be cremated and stored next to Kaitlyn’s ashes.

“He bought a huge shelf that had her urn and pictures,” Cheryl said. “I have that in my den. Now, I have his urn next to her.”

‘You’ve got to trust your God’

Depression impacted “75 percent or more” of Kirk’s body demeanor, John said. Yet, the patriarch, who has two grandsons Kirk was very proud of (Camron and Ryan Abate), encourages those who are suffering emotionally during the coronavirus crisis.

“Being an older guy — I’m 75 — I’m a cradle Catholic … the Christian nuns always told us to put our hearts and minds in the Lord’s hands,” John said. “If you put them in the Lord’s hands, He’ll see you through it. There’s nothing He puts on Earth that you can’t get through.”

That doesn’t mean John goes without days of sadness.

“You’ve got to trust your God, but it’s real hard when you see your granddaughter die and you see your son go away with Him,” John said. “I try to live my life in a positive type of way. I’m as sad as I can be.”

These days, Cheryl sews and donates facemasks for individuals and businesses in need in memory of her son.

Sharing Kirk’s story has also helped her and John cope with their loss.

“It may sound crazy, but it’s our salvation,” she said. “He wanted to go.”

Anyone who needs a mask can call the Veillons at 409-985-7702. A celebration of life for Kirk is still pending due to the pandemic.

If you or someone you know is suffering from emotional distress related to natural or human-caused disasters, call the National Suicide Prevention Lifeline at 800-273-8255. PsychologyToday.com also offers searches for therapists and support groups in our area.