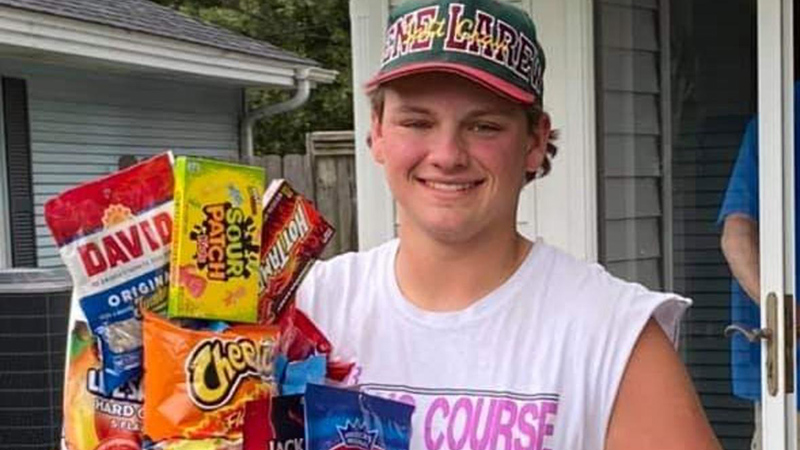 Port Neches-Groves senior Grant Humphrey received a small cooler full of treats and snacks as a part of the adopt a senior program.

She wanted to do more.

“I was thinking about our seniors and what they were all losing,” she said. “So I woke up one day and the idea just popped into my mind. What if a senior could get an “adoptive” parent?”

Plante took to Facebook and the greater Port Neches-Groves community for advice.

She received an overwhelmingly positive response.

“It’s Port Neches-Groves,” she said simply. “Our community has always pulled together. They always support each other, so once I got the approval from the school, I took the idea and ran with it.”

Initially, Plante was worried about the high school’s 365 seniors being adopted once — they’ve all been adopted three times.

“I want everybody to understand that it’s up to them to do what they can do,” Plante said. “It’s like Christmas time. They can give someone a huge gift basket or write a handwritten note, and it’s going to mean a lot to that senior either way.”

Seniors are matched to a community member at random.

Grant Humphrey said while the gifts he received are great, it’s the friendships and encouraging words that meant the most.

“There are so many people involved in our community giving to strangers,” he said. “But it doesn’t surprise me. I have watched our area come together so many times. I think Southeast Texas is tough and giving. Our class has been through a lot, but I know this journey will make us stronger. The adopt-a-senior program is amazing and I just want to say thank you to everyone.”

Port Neches-Groves High School Principal Scott Ryan said it means a lot to see the community rallying behind the students.

“Everyone’s heart breaks for these seniors and all they’ve lost this year, but this program is just a further confirmation on how great our community is,” he said. “They came up with this idea on their own. It wasn’t a school thing, so it just goes to show that their community truly loves them.”

Plante said all the glory and success of the program goes back to the community.

“If it wasn’t for the community, we wouldn’t be doing this,” she said. “That’s 1,095 people participating. That’s incredible and the friendships, the bonds that have been made? It’s all amazing.”

The City of Groves also reached out to Plante to offer its digital marquee to showcase each senior portrait throughout the community.

Photos can be sent to pngndn247@gmail.com. Those who submit are asked to the name of the senior on the subject line.