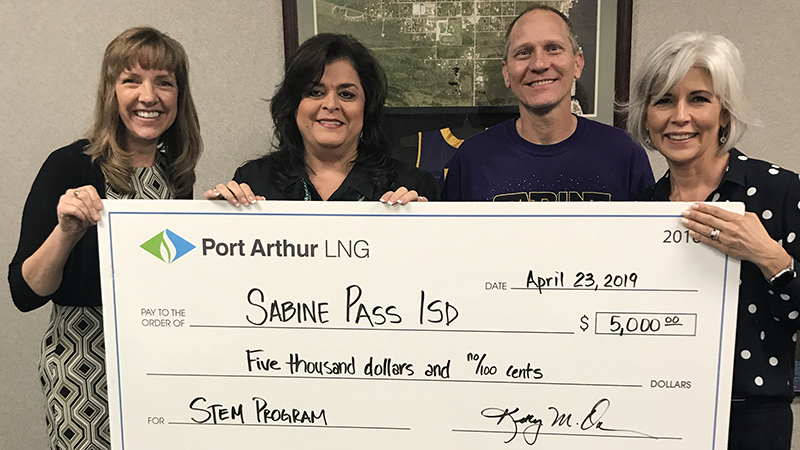 One of Sempra’s core philosophies is to be an active part of the fabric of the communities where it has projects or assets.

Port Arthur, which will be the site of Sempra’s upcoming Port Arthur LNG facility, is no different.

“That’s been a longstanding commitment and we’ve been robust in this, especially where we have projects and companies that are in those communities,” Kelly Prasser of Sempra External Affairs said.

Sempra is investing, and has indeed already invested, in safety, education, environmental stewardship and economic development programs in the area through grants.

During the COVID-19 pandemic, though, Sempra stepped up to pledge $1.75 million in grant funding from a Nonprofit Hardship Fund, with $500,000 dedicated for the state of Texas. Some of the local charities and institutions in Southeast Texas have already been beneficiaries of the grant.

Among the many recipients is the Sabine Pass Independent School District, which received a $10,000 technology grant.

The most recent grant helped Sabine Pass set up technology to facilitate remote classes during the pandemic.

“Sempra continues to give the school district the ability to help our students adapt to an ever-changing world and the challenges it brings,” Sabine Pass ISD Superintendent Kristi Heid said. “Sempra has always been a friend to the community of Sabine Pass. We have had a partnership since before 2005.”

The district has benefited from this partnership in many ways, but a standout program would be STEM.

Through this program, school officials say, students have had many opportunities to impact their learning, benefit the community and touch the world they live in at large.

Sabine Pass is located near Port Arthur LNG’s future site, but even though the ground hasn’t broken yet on construction, Sempra is already making inroads with the communities it will soon join.

“I think it’s really impressive when a company actually really cares about coming in and putting money into a community, even long before they put a shovel into the ground,” said Anya McInnis, Port Arthur LNG spokesperson. “I think it says a lot about their commitment to community.”

Sabine Pass is just one of the institutions Sempra is supporting.

Other benefiting initiatives include the Julie Rogers Gift of Life program, which allows lower-income or uninsured locals the opportunity to receive important and possibly life-saving medical tests, such as mammograms or prostate exams.

“We are very honored by Sempra’s endorsement through the years and so grateful for the company’s generous ‎funding, which has helped Gift of Life impact the lives of hundreds of low-income, uninsured adults who cannot afford medical care,” said Regina Rogers, Gift of Life founder and chair. “Sempra annually sponsors a Gift of Life Mobile Mammography Van screening site, providing clinical breast exams and mammograms for more than 35 women, as well as the program’s June Men’s Health Screenings for 650 men.”

One of the largest grants given by Sempra through its nonprofit fund — $50,000 — has gone to the Southeast Texas Food Bank. 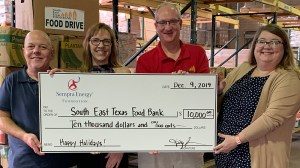 Dan Maher, president and CEO of Southeast Texas Food Bank, said in this time of crisis, he sees many wonderful supporters stepping up and offering help.

“This gift is a further testament to the corporate citizenship of Sempra Energy and Port Arthur LNG and their willingness to set an example by stepping up,” Maher said. “Sempra has proven itself to be a strong partner through other community crises, and they are clearly aware this current crisis is more about the basic human need of health, including good nutrition, than anything else.

“So, we are honored to be chosen by them as a trusted conduit to deliver their corporate generosity in the form of food to those children who often lack proper nutrition in South Jefferson County ordinarily and whose access to nutritious food is even more limited now.”

“This lead gift is a tremendous start to our response to meet the challenges of the Coronavirus pandemic and determine how best to serve our vulnerable youth and their families and to continue collaborating with local partners,” said Kim Phelan, interim executive director.

“We are honored and thrilled to receive support from the Sempra Energy Foundation and look forward to working with the Southeast Texas community to navigate our clients through this uncertain time.”

Other organizations include the Nutrition and Services for Seniors, which provide food and medicine for homebound seniors, receiving $5,000. Liberty Heights Community Center, a distribution channel for Southeast Texas Food Bank, received another $5,000.

“It’s been really wonderful seeing the type of caliber of groups that are applying for the grants, and it just makes you feel good that, not only can we help, but just the great organizations out in the community that are doing these things,” Prasser said.

Mae Terro, executive director of the United Board of Missions, said her organization’s relationship with Sempra’s community outreach began in the aftermath of Hurricane Harvey, when Sempra approached to offer a grant to help support hurricane victims.

Since then, Sempra has helped United Board of Missions in many other programs.

“Each project and program that we have, Sempra has stepped up and says ‘I want to help with that and be a part of it,’” Terro said. “Sempra and their representatives not only have supported us but have continued to be the one that asks, ‘What do you need?’ and ‘How can we help?’ We are so fortunate to have them in our area as our neighbors.” 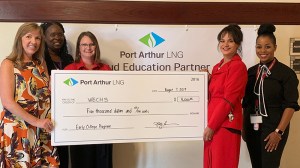 She said the company has done much to support students with resources like books, school supplies and snacks during testing.

“Furthermore, Sempra has been supporting the celebration of achievement of the first graduating class, the class of 2020, from the early college program,” Dodson said. “This has created a lot of excitement among students, parents, faculty and the Port Arthur community.” 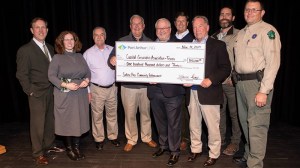 Port Arthur LNG presents a check for $100,000 to representatives from the Coastal Conservation Association, Texas Parks and Wildlife and Sabine Pass Port Authority.

“Whether it’s our charitable giving, our employee engagement or our community advisory committee, those are just some of the things we do,” Prasser said. “Our overall philosophy is not to just provide dollars to organizations. We actually want to get involved and we want the feedback.”