Testing for COVID-19 coming to Port Arthur on Friday & Monday 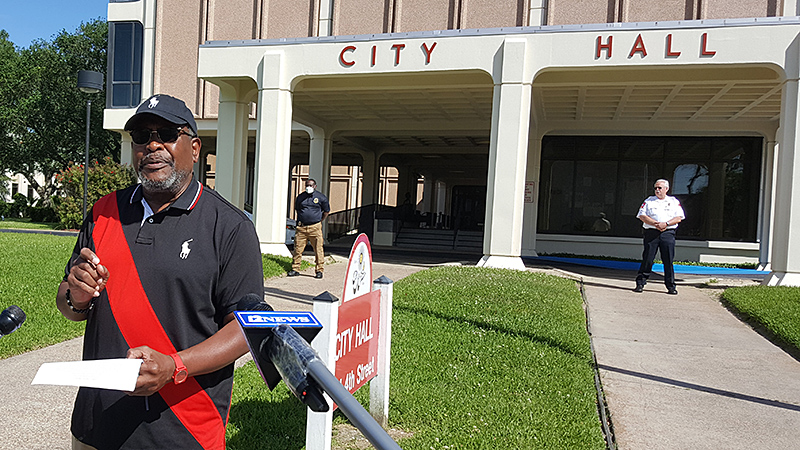 Mayor Thurman Bartie speaks in Port Arthur on Thursday, announcing COVID-19 testing in the city. Unfortunately for residents who turned out, there was no testing.

Port Arthur residents will now have a chance to be tested for COVID-19 in Port Arthur, Mayor Thurman Bartie announced on Thursday.

Testing will be done from 9 a.m. to noon on Friday and on Monday in the parking lot of the Jefferson County Sub-Courthouse located at Waco Avenue and Fourth Street.

Persons wishing to be tested must call 409-983-8384. You do not have to have symptoms. When you call, you will be given information for testing per Jefferson County Health Director Dr. Cecil Walkes, Bartie said.

There is no charge for the testing.

Bartie said he would like to have all residents of the city tested, though some members of the population are more susceptible to the virus.

“Due to comorbidities, the underlying diseases that compound a new infection, unique to the African American population, I, Mayor Thurman Bartie, request that all Port Arthurans please take advantage of this opportunity for testing,” Bartie said.

The city, he further noted, is roughly 49 to 52 percent African American and 35 percent Hispanic. This demography warrants testing of the entire population of the city before Port Arthur can begin to “open up” to the usual way of life, he said.

“I respectfully support the economic position of the governor; however, not containing the COVID-19 spread before retuning would be detrimental to future endeavors of survival,” he said.

Bartie said the testing availability came as an amicable discussion between him, Walkes and Jefferson County Commissioner Michael “Shane” Sinegal, as well as former state Sen. David Bernsen, who all expressed desire to have the testing available in Port Arthur.

The testing will be sent to the same lab that processes tests from Jerry Ware Terminal at the Jack Brooks Regional Airport. It is believed the results would be available in the same amount of time, about 48 hours.