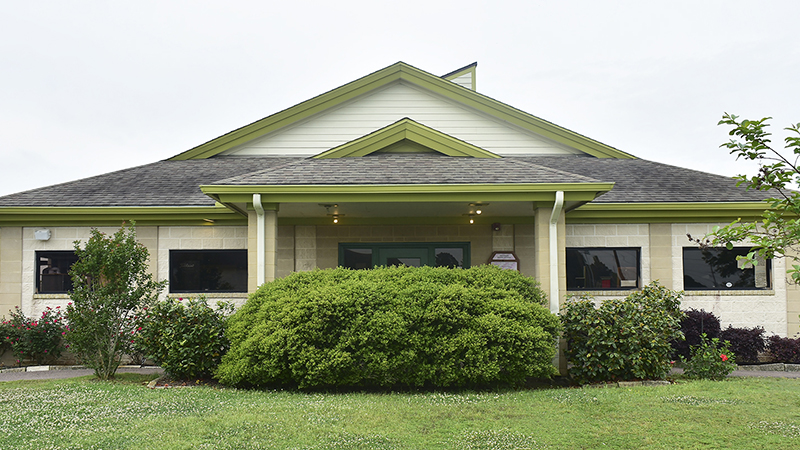 No more than three persons at a time can occupy this clubhouse at Babe Zaharias Municipal Golf Course. (I.C. Murrell/The News)

Aquila Golf CEO George Brown deferred comment to Walker, who argued golfers and other citizens have the right to exercise and enjoy physical activity with proper protocols. Walker expressed thanks to Bartie and the city for allowing the course to reopen.

“Everybody is on the same page,” Walker said. “We want to keep everybody as safe as we can and stop the spread of coronavirus.”

Bartie acknowledged he issued his amended order this week based on legal advice from the office of Texas Attorney General Ken Paxton.

Such services include restaurants offering take-out or delivery options, landscaping and sanitation.

Golf course personnel such as starters, marshals and pro-shop staff who do not provide essential services must follow the general rule of Abbott’s order, which is to “minimize social gatherings and minimize in-person contact with people who are not in the same household,” Vassar wrote.

Bartie maintains he still has the option of keeping The Babe closed.

“The AG’s [advice] is not like an order,” Bartie said, adding Vassar’s explanation in closing that the letter is not an official opinion or an exhaustive memorandum of law. “With that, [the course is] going to abide by the rules.”

Among the stipulations in Bartie’s amendment:

Jefferson County Judge Jeff Branick issued an addendum to his “Stay at Home, Work Safe” order on April 7 requiring all golf facilities to shut down immediately. Branick lifted that policy less than 24 hours later, at which time Bartie issued an order to close golf facilities.

The Babe is the only active golf course in Port Arthur.

Bartie and Branick acted on a verbal request from Abbott to close all golf facilities in their jurisdictions. Abbott referred to CISA guidance that did not list golf as an essential industry.

“The Governor’s office has no authority to limit people’s physical activity,” Walker said. “The Babe benefits the taxpayers of Port Arthur. While [Bartie is] trying to be proactive and do the right thing, I’m not sure the mayor’s order was in compliance with state law. The taxpayers of the city of Port Arthur would lose money every day the course is not open.”

“We can recoup the money,” Bartie said. “I didn’t [shut down the course] based on finances. I did it to save people’s lives. … It boils down to what’s the prudent thing to do.”

The temporary restraining order is in effect for 14 days and can be extended by Templeton just once for 14 more days.