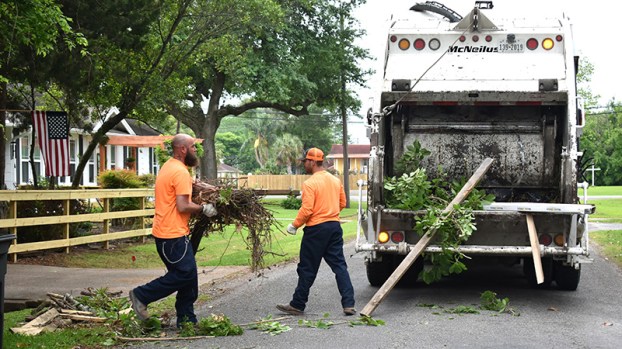 PORT NECHES — The usual safety precautions of sanitation specialists in Port Neches are taking on extra importance during COVID-19.

The city of Port Neches still uses garbage trucks where workers stand on the rear of the truck and toss trash into the back.

Brian Stutes and Matthew McKinney were on duty around Avenue B earlier this week and talked about COVID-19. McKinney said he wasn’t worried about it

while Stutes said he tries not to think about it.

Stutes has been with the city for 17 years and is a garbage truck driver, so the guys who work with him have more contact with the refuse than he does.

He’s actually not doing anything different at work safety-wise than he was pre-coronavirus. He and other sanitation specialists wear gloves and wash their hands at the appropriate times, such as before meals.

The first thing he does when he gets home is take off his boots and leave them outside, then gets undressed and showers.

He did this routine before COVID-19.

Confirmed cases of COVID-19 in Port Neches have jumped in recent days and now stand at five, according to health department reports as of Saturday night.

The two newest cases involve a female between the age range of 40-45 who is now quarantined at home and a male between 55-60 who is in the hospital.

It has not been determined whether these cases are travel-related or community-spread.

Typical days for the sanitation workers have changed since the “Stay at Home, Work Safe” rule passed down by the governor. More people are at home, which means more people have time to do spring-cleaning.

“Mondays and Tuesdays are the worst; they are long days,” Stutes said. “Since coronavirus we put in 10, 11 hours a day.”

And, instead of going to the dump — the city of Port Neches has a contract with the landfill in Beaumont — twice on Monday and Tuesday, he now goes three times on those days.

Taylor Shelton, director of public works, said there is a possibility of being exposed to the virus, but it is limited as the employees are not having face-to-face contact with people.

He described the sanitation specialists’ exposure as limited when compared to that of doctors and EMS.

“They always wear gloves and there is double bagging when there is a possible contamination with someone sick,” Shelton said.

Not everyone double bags their garbage but this is something Shelton might suggest to officials in the future.

These are the same precautions taken when the area was dealing with mold, he said.

(Editor’s note: This is one of a series of stories published this weekend in Part 2 “POWER” of The Port... read more