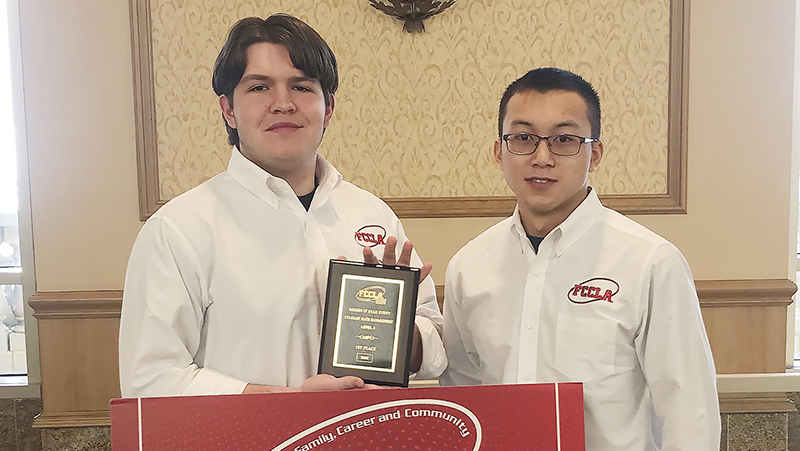 NEDERLAND — Two Nederland High School students are advancing to the Family Career and Community Leaders of America national competition in Washington, D.C., this summer after winning the culinary math category in regional and state competitions.

Junior Will Isbell and senior Brian Mai placed first in both levels.

Nederland Independent School District culinary arts teacher and chef Chuck Harris said this is only the second year the district has competed in the competition and the first year local students placed.

“It’s great,” Harris said. “Last year was a learning curve, so it was great to have students actually place this year. I’m excited for them. After meeting in school and class, I knew they had the ability to do it. They signed up and did really well.”

The culinary competition is geared toward hospitality and tourism for students interested in restaurant, food industry or tourism careers. Harris said the culinary math category is a three-part process.

The first step is a student project. Isbell and Mai created a fictional food truck.

“The project showed how math is involved with pricing the menu and cost,” Harris said. “They present that to the judges for scoring. The second part is individual tests on different types of math used in the food industry. The third step is a timed case study students work on together by providing a balanced solution.”

Family Career and Community Leaders of America announced the winners of the state competition Saturday through a live YouTube video.

Isbell and Mai beat out more than 10 teams at the regional and state levels. Both were surprised to hear they won first place.

For Isbell winning the competition is a big deal.

“I’ve never competed in anything at this level,” he said. “Initially, I wasn’t expecting to even place in state, then we got first. I am really happy about it all.”

Isbell has aspirations to be a chef.

The $5,000 awarded scholarship to the Auguste Escoffier School of Culinary Arts in Austin is a step in the right direction.

“Having that sort of scholarship to a great culinary school, it’s a big deal to me,” Isbell said. “That’s the reason I joined the competition in the first place. That’s big news.”

Isbell said the culinary arts department at NISD has been a great opportunity for him. Next year, he is hoping to compete in an actual cooking competition for FCCLA.

“Ever since I was younger, cooking was something I always enjoyed doing,” he said. “I love it and I’m ready for the challenges that come with being a chef. It’s something I’ve always wanted to do.”

The Nederland native hopes to run his own restaurant in the future.

“Knowing the math aspect of (owning a business) is a very big deal,” he said. “During the competition I told the judges you have to know where all your money is going and that’s why I did culinary math. Knowledge is vital to running a business.”

Isbell said his partner was a big part of helping him understand math in a business environment.

“(Brian Mai) is crazy smart, and he showed me how to run a business in a proper way,” he said. “He’s very smart and I hope he gets the right amount of credit. He was a big part in helping us get first in regionals and state.”

Mai echoed the sentiment, although his career path will take him down a different path in engineering.

“It’s a surprise for me that we are going to nationals,” he said. “Even though I want to be an engineer, culinary math is similar to engineering because it’s about numbers and money management.”

Mai said he is excited to learn of the district’s decision to send them to Washington.

“Even though I don’t want to be in culinary arts, the positives are that I get to meet a lot of people,” he said. “I get to know them and make connections.”

Harris said it is the team compatibility that allows the two students to continue climbing in ranks.

‘”Will is more outgoing, but Brian is strong in technical math,” he said. “Together, figuring this out from two points of view offers strength. That’s why they’ve done so well.”

Nederland ISD district officials will send the two competitors and their counselor to nationals July 5-9, pending the reopening of travel.