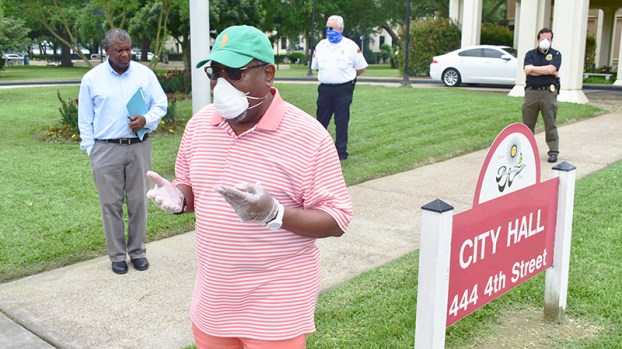 The risk of spreading coronavirus in Port Arthur led Mayor Thurman Bartie on Wednesday to declare that the use of playground equipment and basketball and tennis courts in city parks is prohibited.

The use of parks themselves, however, is not, although residents are asked to not gather in groups of 10 or more and maintain social distancing.

“There were folk who were probably, maybe, overzealous and staying in the parks and playing basketball, maybe even tennis, but too close in contact with each other,” Bartie said. “I personally witnessed a lot of it, and then we began to receive calls. And, then it became time to move to what we’ve gone to now, and that’s closure.”

The Port Arthur Parks and Recreation Department removed basketball goals at some of the parks, and Bartie asked that residents don’t try to put their own hoops up in attempt to play.

“You’re going to be in violation, and then the police would have to get involved with probably trying to get you from out of there,” Bartie said.

Jefferson County Judge Jeff Branick, who issued an addendum to his order Tuesday afternoon to specifically address the temporary closure of these facilities, cited Abbott’s reason of the facilities not being considered essential services in Texas.

Bartie used his latest news conference to take a firmer stance in favor of using facemasks or plastic gloves in public. He stopped short of mandating them, however.

All city departments, he said, are functioning as usual, although visitors’ entrance to city hall is closed. Bill payment may be taken care of at the city hall drive-thru or at portarthurtx.gov.

As for upcoming Good Friday and Easter this weekend, Bartie continued to strongly discourage in-person worship services and encourage social distancing, although church services are considered essential in Texas.

Bartie said in closing: “Please do what we’re asking you, because Jesus got up. You won’t.”