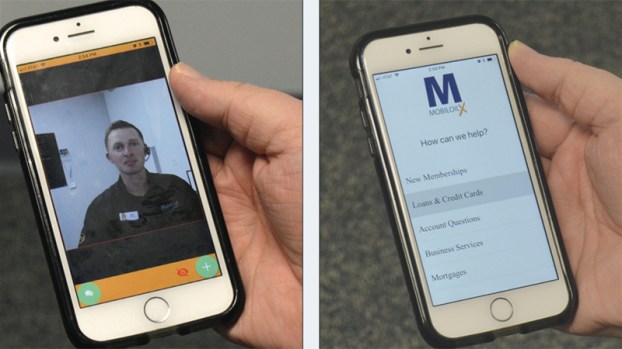 Mobiloil’s service representatives from across the credit union’s branches are now able to take care of members at whatever branch they may be through interactive touchscreen kiosks.

The new initiative was begun as a way to make service more efficient, according to Jacob Wills, Associate Vice President of Branches.

“The reason that we started doing this was, basically, efficiency,” Wills said. “A business has to think about that to make sure that we’re making the best use of our time and our people’s time, but also that the members who are coming in and that we’re waiting on aren’t waiting too long.

“By roping all of our member service representatives into a centralized location, we are able to speed up the process. Now everybody is entered into the same queue to be seen, whereas before, you went to a specific branch, you’re just in line at that branch. Now you’re all in the same line.”

With the new video system in place, wait times were cut down from as long as 45 minutes to just five, Wills said.

“There’s video logs that we can go back, review, help coach and train, and we can use it as a demonstration for people,” he said. “We have been able to drill down that our average waiting time now, across the board, is less than five minutes. That is from signing in to some video representative picking up and being online with them.” 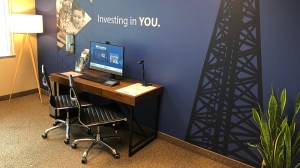 Mobiloil Federal Credit Union’s video suites allow members to see any representative of any branch as soon as they are available.

Then the coronavirus outbreak happened. Branches were forced to close their lobbies to public traffic.

Smart Solutions Manager Jared Wilson had been spearheading development of a version of the video technology that could be used in a smartphone app. Wilson and Wills worked together to get this app ready to launch as soon as possible so representatives could continue to serve credit union members while maintaining proper social distancing protocols.

“We did a lot of testing — it always takes a lot of testing,” Wilson said. “I was just very surprised at how simple it was to learn the app, and also seeing it from the member’s perspective. I can almost say we role-played, basically, member versus employee. I was seeing it from both sides how simple it was. It was a great experience to test this and to see it get ready so quick. That was the neat thing.” 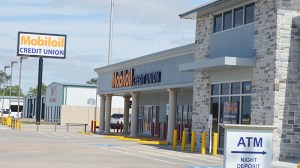 The app, now live and available for download for free on the Apple App Store, can do nearly anything that could be done in person at Mobiloil branches, Wills said.

About the only things the app can’t do is notarize documents or immediately provide members with new debit cards.

New cards can still be mailed to members.

“The only thing in terms of signing that we maybe couldn’t do is if there’s some sort of title transfer and we have to have the original title of the vehicle. You’d have to drop that off or mail that into us at some point. Other than that, we’ve honed it all in and figured a way to do it.”

Representatives are taking to the new system quite well, Wilson said.

“When we started smart offices, it was more questions and discovering how it works versus, ‘No, I don’t want to do that. No, I don’t want to be put in that department,’” he said. “They’re finding that it’s simple and it’s actually working. That is the big thing. They’ve all really jumped on board with it.”

Members seem to like it just as much as well.

“They think it’s really neat,” Wilson said. “The technology portion, they like that. They also like the fact that it’s very simple and very easy. And they can sit at home at their kitchen table and give us a call versus having to get out and drive to an actual branch.”

A big part of the quick adoption is out of necessity, Wills said.

Members now have to get used to communicating through video calls due to the virus outbreak and are becoming more receptive to the technology.

“If you want to see your grandkids every weekend, you have to do this FaceTime thing,” he said. “People adapt better than what we would have thought, and it’s gone really, really well. Most of the time if we can get the person to try it, they come out of it saying that was actually really cool. So we’re really pleased with how it’s been received and adopted.”

Wilson said the app is likely going to be a game-changer for Mobiloil FCU in the industry, especially with current circumstances around the virus outbreak.

“With, of course, the shutdown that we’re in right now, where members can’t get out and about, we have the ability to assist you from your home,” he said. “I think that’s going to put us up the next level above other institutions. They’re all great, but the fact that we can shut our doors and lock down our branches but still assist you 100 percent outside of the credit union, I think is going to change the face of Mobiloil.

“We’ve always been people helping people, and now we are really showing that is what we’re doing. That’s our main focus. We are shut down, but yet we’re here behind closed doors still finding a way to assist our members and make sure they’re taken care of in a time like now.”