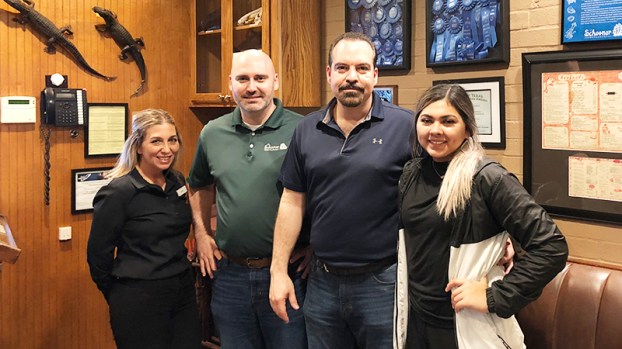 Summer Molina, from left, George Megas, Steve Megas and Victoria Garza stand inside The Schooner. Molina worked at the restaurant 12 years ago and returned in September, while Garza started working a few months ago. (Brad Robichaux/The News)

(Editor’s note: This is one of a series of stories published this weekend in Part 1 “Smarts” of The Port Arthur News’ 2020 Vision For Success series. The series appears each weekend in April and can also be read at panews.com.)

Steve and George Megas practically grew up at The Schooner restaurant, to the point that it became like home for them.

“We’ve been raised in this business,” Steve Megas said. “My family’s been in business here since 1950, and my dad has had the restaurant since 1968. We’ve all been born and raised here in this business, and been a part of it our whole lives.”

George Megas said the restaurant was ground zero for his siblings.

“My sisters went off in different things, and Steve and I stayed,” he said. “We enjoy the restaurant. It’s kind of home. As young children we were always here, and it’s almost second nature to be here at the restaurant, to be honest.”

Inundated, as it were, in the culture of the restaurant their father Constantine purchased in 1968, the Megas brothers’ presence at The Schooner forms an integral part of the smart method the restaurant employs to remain a fixture in the community for more than 70 years. 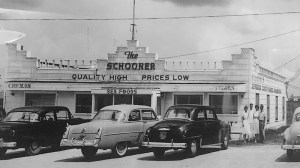 The original building for The Schooner Restaurant burned down in 1959, and the restaurant moved to a new building, its current location, built in 1960.

The method is something outlined and passed down by Constantine: Love your customers and love the work, because the restaurant business is a way of life.

“You have to love the public, you have to enjoy work,” Constantine said. “We did it every day, day in and day out. For a long time we did it seven days, but right now we’re closed on Sundays. Besides having good food, good service and a good place, it’s a life that is pretty much lived in the restaurant and with the public.” 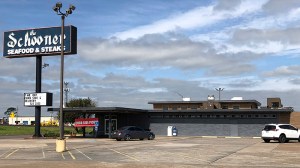 The Schooner Restaurant is located at 1507 U.S. 69 Access Road in Nederland.

Commercial real estate has also become a part of the Megas family business over the years, with the family owning a few shopping centers, including the one behind the restaurant itself.

Unlike real estate, however, Steve echoes his father’s philosophy and says the restaurant business requires time and a hands-on approach.

“It’s a tax on our time, and it’s a lifestyle, almost, to own and operate your own restaurant,” he said. “To be able to do it right, you kind of have to be there, and there’s only so many hours in the day and so many hands on deck. We want to be able to be seen by the customers and make sure we’re providing a quality service and products that we expect. It’s kind of hard to do that and not be here on a regular basis.”

To accommodate their customers, Steve says The Schooner puts its focus on providing a quality product and quality service. Price, while important, comes second.

“We buy quality first,” Steve said. “We try to buy most or all of our products locally, and we’re buying shrimp from Port Arthur from JBS Packing Company, and our catfish comes from Louisiana at Guidry’s Catfish Farms. We’re buying local crabs out of Louisiana, as well from several families. We provide a quality product, and it’s not based on price, it’s based on quality. I think that differentiates us from some of our competitors.” 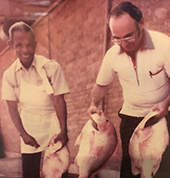 Constantine Megas, right, in an old photo adorning the wall at The Schooner restaurant.

George says the restaurant is still careful with prices.

“For the customers, we try not to overprice the items,” he said. “We know we’re not cheap. We’re on the higher end of the price range for restaurants in our area — I believe we’re the highest — but we buy good quality products. It’s some of the same quality products you see in Houston that we buy for here. We can’t charge those prices but we’re good with our margins.”

Like the product, The Schooner expects quality service from its employees, its management and owners.

It doesn’t expect the effort for nothing, though.

“It’s just an amazing family to work for,” said Summer Molina, who worked as a server at the restaurant 12 years ago and returned once again in September. “They really care about their employees and the community. Any time you’re in need of anything, they’re here to help you out, whether it be food or money, they’re there to help you through your tough times.”

As the owners, George and Steve say it’s not always about money when it comes to taking care of their employees.

“We have a great staff,” George said. “We have staff in the kitchen that have been here for years. We try to pay them well. We let them get overtime to build up their paychecks so they can support their families. It’s not all about money. That’s not the main reason to be here. It’s important but it’s not the most important.”
Steve also said it is not all about pay.

“You have to understand that these people have lives outside of this building, so you have to be able to work with them to try to be accommodating,” he said.

With a staff that’s taken care of, quality service allows for customers to feel more at home, almost in the same way the Megas brothers feel at their restaurant.

“Talking to the customers, you get to know them personally.” George said. “I remember my dad telling a story about an older gentleman, saying he remembers putting the man in high chairs, and now he was putting his grandkids in high chairs.”

“If you don’t like it first, then there’s no way that the customer is going to like it,” he said. “You have to like it first, and so you provide what you expect when you go out, and I think it’s a pretty simple philosophy.”

Region’s ‘Smarts’ are our ticket to a better tomorrow

No one expected 2020 to be anything like this. The COVID-19 coronavirus has thrust us all into uncharted territory. Where... read more