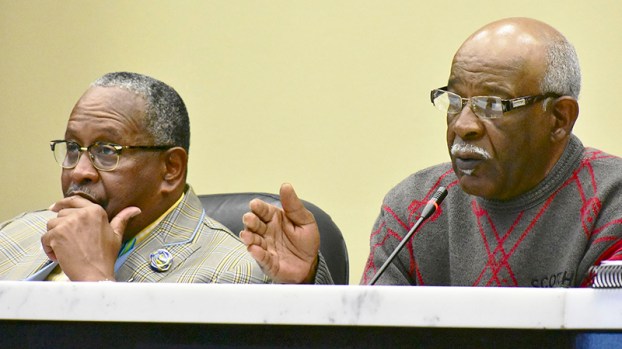 Mayor Bartie responds to concerns about near $6K cost of Washington, D.C. trip

This time, Doucet admonished Bartie for bringing back what he considered a big price tag from a National League of Cities conference — $5,893.36 — which the city council unanimously approved for reimbursement during Tuesday’s regular meeting via videoconference.

“I found that to be extremely high,” Doucet told Bartie. “We amended the travel budget and we talked about it in depth. We addressed it by amending the travel order and understanding what councilmembers should and should not have.

“Your travel was seven days. I’ve been to NLCs for five years. We just had one in November. Why was it seven days?”

Bartie traveled to the NLC Congressional City Conference from March 6-12. The conference dates were March 8-11, but registration was open for the two days prior. Activities on March 7 included an NLC University Seminar, committee meetings and a Board of Directors reception.

Bartie said he didn’t feel a need to defend his expenses, although he explained he went to the conference for training and advocacy of local issues.

“I’m a councilmember with the Community and Economic Development committee, and I’m also on a committee on racial equality,” Bartie said. “I was not there for rest or relaxation. I was there all those days doing what I needed to do, being a participant. I didn’t try to defend that [to the council]. I didn’t need to. I’m not misusing taxpayers’ money.”

Doucet aired his concerns 11 days after bringing a facemask to a March 20 emergency city council meeting upon learning two attendees of the conference from Colorado were infected with coronavirus. Doucet sits to Bartie’s left at the chamber’s dais.

Bartie said he did not believe he attended the same sessions as those attendees, but he and the other councilmembers followed suit and wore masks that were handed out.

“We should make our decisions so we can register and make our same registration fees so the cost to taxpayers are kept at a minimum,” Doucet said. “We don’t get rental cars on the back end of conferences. We don’t fly and then get a rental car. We either shuttle or take a taxi. … If we need to revisit our travel ordinance to clarify, we need to do it.”

The News requested a copy of the travel ordinance for city officials and employees, but has not yet received one.

Travel costs were a point of emphasis for Doucet following the trip of five city councilmembers to the five-day Texas Municipal League Conference in San Antonio in October. Expenses ranged from $1,345.61 to $2,935.07.
Bartie said he wasn’t bothered by Doucet’s concerns, adding he was the first mayor in his region to call a meeting at the conference. He declined to elaborate further.

“When people want to nitpick, that’s what they do,” he said. “I’m accustomed to that. As long as I have this term as mayor, I’m going to lead in a way God has directed me to lead.”

“We spent a lot of time devising the right policy concerning travel,” Kinlaw said. “To make connections and find things to bring back to Port Arthur, I don’t think you can do that at home. … I pick classes based on the needs I feel can help the city of Port Arthur grow. They may not be necessarily free.”

Councilman Cal Jones said Bartie has been busy at his job ever since his term began last June and hasn’t just been traveling.

Councilwoman Kaprina Frank, however, said trying to explain expenses to citizens is hard.

“This is not a corporation. This is a council,” she said. “A lot of people are struggling, before and after Harvey. It’s not a private entity. It’s taxpayers’ dollars. Of course, the travel was before all of this, but the economy is struggling.”