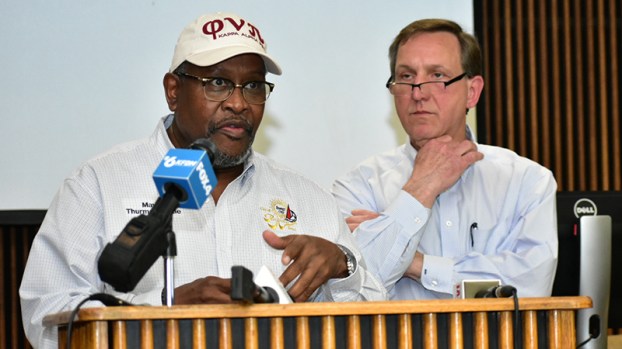 Bartie’s observations came three days since he announced a stricter version of recent emergency orders aimed at slowing down the spread of coronavirus. The city’s ordinance mirrors that issued by six Southeast Texas counties including Jefferson, but it is not a “shelter-in-place” ordinance.

“Seems like, so far, it’s not as much traffic as it could be,” Bartie said, on his way back to city council. “The traffic isn’t as busy. We have a lot of people complying.”

Still, Bartie fears the worst for the count of residents who have tested positive for coronavirus. As of Monday afternoon, four Port Arthurans have been confirmed to have the novel disease also known as COVID-19.

The first confirmation in Port Arthur came Wednesday and two more were announced Friday. No information was available on the fourth confirmation, but the Southeast Texas Regional Emergency Operations Center counted four.

Each patient in the first three cases is between 28 and 50, and each of those cases is related to travel, according to health officials.

“This is going to be the week where our numbers spike, either by [Tuesday] or the next day,” Bartie said. “We’ve got the ability to test. We get a bulk of the tests back.

I would hope the people take this seriously. My concern is for people all over the world, particularly our Port Arthur citizens.” 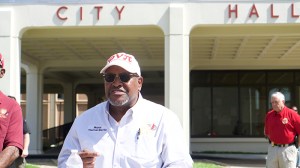 The EOC’s call center has received 1,480 calls as of 5:17 p.m. Monday, including 243 on Monday. References for testing since the call center opened have totaled 589, with 86 of them visiting the drive-thru at Jack Brooks Regional Airport on Monday.

The call center is now open 24 hours every day. Anyone experiencing coronavirus symptoms (fever, dry cough, shortness of breath) or believing he or she has been exposed to an infected individual may call 409-550-2536 to be evaluated for testing.

President Trump extended social distancing guidelines for the U.S. through the end of April in response to a death toll that could exceed 100,000 people, according to the Associated Press. Bartie, however, is not convinced the end of April would be the stopping point for the coronavirus impact.

Those looking for information on COVID-19 are asked to call 211, option 6, or visit www.setinfo.org, but also to not contact the call center.

“We’re going to be in this for a few more months; I’m thinking until July,” he said.

Visitors to city hall will meet an officer at the entrance, and an employee will be asked to come down to the first-floor lobby to meet the visitor, Bartie said. The doors are otherwise locked during business hours, and residents are encouraged to take care of city services by visiting portarthurtx.gov.

“The other departments that are doing non-emergency work, it’s residual work so the city can continue to function, like garbage work and utilities,” Bartie said. “No one has formed a complaint because they can’t get in.”

City officials have staggered work times for all employees.

Asked how the city would respond if the coronavirus impact further hinders the economic growth of the city, Bartie said no one has a “foolproof answer” to solve the issue.

“All we can do is probably try to find some innovative ways for short-term employment for students and non-craft workers,” Bartie said. “I don’t even know how we’re going to do that. I don’t have a blueprint for this. This has never happened.

“This is no fly-by-night problem that will be over in the next few weeks. That’s the thing our citizens will have to get a grip on.”

Word to the clergy

Bartie, a licensed minister, placed an emphasis on worship activities in updating his emergency order.

Houses of worship are not allowed to have more than 10 people at any time, and funeral directors are asked to observe the limit, with three of the 10 being funeral directors. Other than to shop at a grocery store or visit a doctor’s office or pharmacy, going out of the house is discouraged.

In a recent text to local ministers, Bartie addressed how churches can observe communion, also known as The Lord’s Supper. Many Baptist churches practice communion every first Sunday of the month, but Bartie asks citizens to not drive to the church for it because that still constitutes contact from one person to another.

The text reads in part:

“You sanctify the elements which represent the body and blood of Jesus Christ. Those elements may be wine and unleavened bread, however, if these are not available, do you not observe the ordinance of The Lord’s Supper. Extenuating circumstances may dictate observing with what’s available to the Christian believer. The believer may be at home and only has a cracker, bread or meat; and water may be liquid. These now become the elements which represent the body and blood of Christ. Praying over them for sanctification and the Christian believer setting his thoughts on Jesus allows for the atmosphere for partaking of the sacrament wherever he may be!”