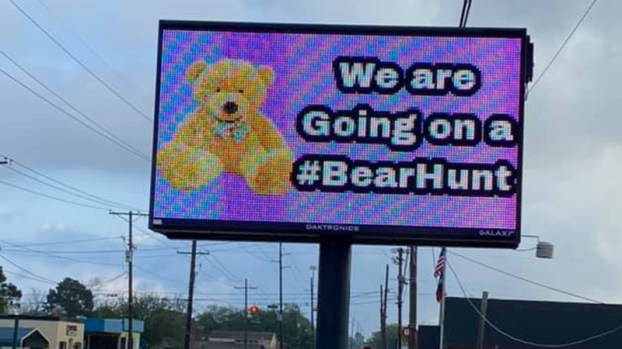 MARY MEAUX — We can still come together and keep a distance

It’s hard to believe how much things have changed in about two weeks time.

Back on March 11, we learned the Houston Livestock Show and Rodeo was being canceled, and many of us wondered why.

This is a Texas event that Texans go to. Then we learned why and, sadly, it made sense.

Same thing for the South Texas State Fair being canceled.

COVID-19 cases across the nation are rising with talks that it will get worse. Jefferson County Judge Jeff Branick followed the President’s coronavirus guidelines asking people to avoid gathering in groups of more than 10. Schools have been closed, and many other new safety guidelines put into place.

But there has been some bright spots in the otherwise grim world of self-quarantine — bear hunts.

And instead of hunters with firearms, it’s families loading up in cars and driving through neighborhoods looking for stuffed bears or other such fuzzy creatures perched in windows, porches or chairs.

Several Facebook groups for local communities have posted about their bear hunts with residents chiming in to say which streets to drive down, much to the delight of children.

Even the city of Groves joined in on the fun displaying “We are going on a #bearhunt” on their digital sign outside the Recreation Center. Their Facebook page touted photos of a stuff bear in an office window.

All of this is happening in a time when we can’t come together or embrace each other — what a wonderful thing.

Houses of worship are also impacted by the gathering rule and adapted to it.

A priest in Beaumont placed the names of his parishioners on the pews and he celebrates the Holy Mass privately. There’s the Rev. Shane Baxter and Rev. Shiju Augustine who brought out an outdoor altar at St. Elizabeth Catholic Church in Port Neches and celebrated Mass in the parking lot as parishioners were in their cars.

The parish used an FM transmitter to broadcast the Mass. And the Bishop live-streamed Mass on Sunday, according to the Diocese of Beaumont.

First Baptist Church Nederland pastor the Rev. Jason Burden goes live on Facebook daily with devotionals, updates and inspiration at 7 a.m. and 7 p.m. as well as other times for Bible study and worship service.

Memorial Baptist Church in Port Arthur has also live streamed its service, and I’m sure there are many more that I’m not aware of.

As we embark on this never-in-our-lifetime kind of journey, we can take some solace that even if we are forced apart we can still gather, albeit with some restrictions, and enjoy the company of others, be it through our faith or something as simple as a bear hunt.

CASSANDRA JENKINS — Sticking to schedule is imperative during homebound learning

Monday marked the first day for all Mid- and South County school districts homebound learning programs, and many parents are... read more