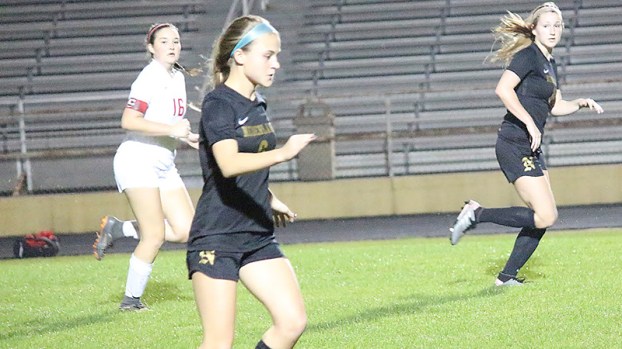 Jordan Minaldi dribbles the ball in her new position as a center-mid for the Nederland Lady Bulldogs. (Courtesy photo)

She moved from a wing position to  center-midfielder. The new position allows Minaldi to play to one of her strengths as a passer, but she’s making a conscious effort to dribble more and be more aggressive handling the ball.

“As a freshman I didn’t really take initiative,” Minaldi said. “I dribbled, but I kind of just helped other people move forward and score. This year I’ve taken a new role. I dribble the ball more, take more shots and really try and control the midfield and speed of play.”

Minaldi played an important role setting up many of the plays that got the Bulldogs the win over Cleveland, 8-0, on Friday. For that she is named The Port Arthur News Girls Athlete of the Week.

Head coach Aaron Tomplait said one of the eight goals was Minaldi’s as well as several assists.

“Stats can be deceiving,” he said. “What she does for us is she takes a lot of our set pieces, whether it’s a corner kick or a free kick. You always looks at that as a big positive as a player, to be trusted with that part of the game. We depend on her a lot.”

Now a junior, Minaldi says the time she spent playing varsity while she was sometimes two or three years younger than the other girls gave her great experience, even if it was a little nerve-wracking.

“It was different but it was a fun competition to have,” she said. “It was a good experience since I had been playing against girls my age my whole life, and now they weren’t my age, so it was more of a competition.”

Minaldi says despite the loss of many key seniors from last year’s team, this year’s Bulldogs are nearly as good, even if they play differently.

“This year we basically had to start from scratch with a couple of returners, but I think we’ve done well doing with what we’ve had,” she said. “I think our chemistry’s good and we move the ball well. When we need to show up to games we show up.”

Minaldi is one of those that stepped up to help lead the team, Tomplait said.

“We ask a lot of her,” he said. “The ball goes to her and she’s going to try to distribute it out to the other players for a chance to score. Anytime you see something on the scoreboard, there’s a good chance she had a part in it. She’s stepped into that role this year. It’s taken her a little time to get used to it but she’s really grown into it.”

Minaldi has tried other sports, playing volleyball and running track in her freshman and sophomore years, but soccer holds a special place in her heart.

“I tried dance and things like that but it didn’t really give me the joy that soccer gave me,” she said. “It just made me the happiest whenever I was playing it out of everything else. I really like Coach Tomplait and all the other coaches I’ve had in the past. They’ve really helped me develop a love for this sport.”

The Bulldogs take the week off for Spring Break before playing their final regular season game against Dayton on March 17 at 7 p.m. at home.

Greyson Ramburg is getting a taste for playing out in the field, and Nederland coach Keith Barrow believes the senior... read more