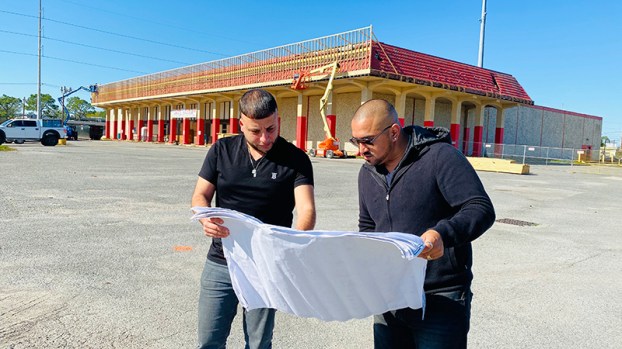 Two local developers are taking a risk to convert a large vacant building into a thriving businesses.

Joe Aref and Warren Pena have partnered to purchase the old Market Basket site in the 1800 block of Jefferson Drive adjacent to Thomas Jefferson Middle School.

The building sat vacant for 20 years with no tenants until it got into the right hands, Pena said.

The men are making repairs and signing leases. The former grocery store is about 50,000 square feet total in size, and about 18,000 square feet of that will be La Vaquita Meat Market.

“And we are talking with a company out of Houston who wants to bring an event center,” Aref said of 18,000 square feet of the space.

A smaller section, about 8,500 square feet, will be a Chinese buffet restaurant. They expect the other, smaller parcels to go fast; they already have a commitment from a Herbalife business for a small spot.

Pena said La Vaquita will be a meat market and a grocery store with a 6,000-square foot restaurant inside serving Mexican food. It will also include an ice cream shop, bakery and a few other things.

The long vacant building is in good shape, including the slab, Pena said. The building is getting a new roof and, of course, electrical, sewer, and water.

“We are basically gutting the whole building. The only thing that will stay is the concrete wall structure,” he said.

They are also adding a stucco façade on the front of the building.

In the near future they plan to speak with the city’s economic development corporation on incentives.

Why buy an aging building?

Aref and Pena grew up in the neighborhood and both went to school next door when it was Thomas Jefferson High School.

“It is a risk, but it’s a risk we feel like we have to take,” Aref said. “It’s a solid risk and worth the risk for our community. And also, that building has been sitting for 20 years now. If it wasn’t for somebody like me and Warren, risk takers, it would sit another 20 years.”

The business partners expect to have the work on the building done quickly — within six months and be open by late summer or early fall with one to two tenants inside.