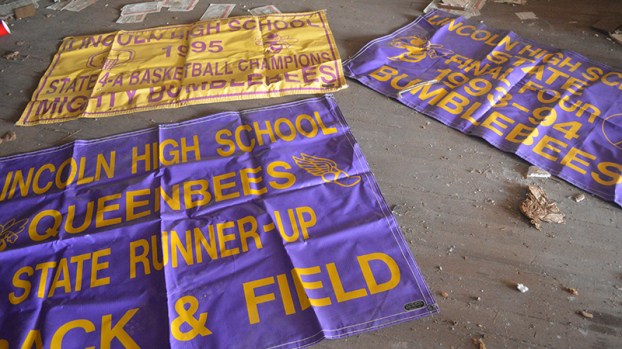 Lincoln’s 1995 4A state basketball championship banner, along with two others, were found in an old high school museum in downtown Port Arthur in this Aug. 23, 2016, photo. (Mary Meaux/The News)

Dominique Hardie wants to be clear that at Lincoln High School, basketball was played at a higher standard.

“I don’t think in Lincoln’s history since the 1980s that Lincoln went four years without either winning state or going to the state championship tournament,” he said. “While some other schools celebrate district championships — which is still amazing — at Lincoln that was the standard. The goal was state though, and that excellence that you strive for every year is really important, because our standard was so much higher than everybody else.”

That standard also made a loss at the championship tournament that much more stinging, as it did for the 1993-94 Lincoln Bumblebees. Lincoln fell to Austin Anderson in the semifinal round, 82-72.

“I remember how we were crying in the locker room after it was over,” Hardie said. “If you would have gone in there, you would have thought somebody had died. People were sobbing and crying. I remember we got together and were determined that we weren’t going to let that happen again.”

Sidney Keal remembers sitting on his grandmother’s porch with Stephen Jackson that summer after the 1994 loss. Jackson would go on to a championship career in the NBA and now hosts a Showtime Sports podcast called “All the Smoke”.

“I remember me and this guy literally looking at each other crying because we felt like we were failures,” Keal said. “Here it was my second time coming back home with nothing, and we started that next day preparing for our next season with the rest of our teammates.”

That was what motivated Keal, Hardie, Jackson and the rest of the Bees when they started preparing for the next year. All thoughts were laser focused on the state championship.

“They just wanted redemption,” said Andre Boutte, Lincoln’s coach from 1989-97. “They had gotten a taste of going to Austin and living the Lincoln history of winning state championships. They had got a taste of it. But, it was not a sweet taste. It was a bitter taste. These kids were determined to go out on top.”

They did, and they did it by beating the same team that knocked them out the previous year, no less. The Bees claimed what would be Lincoln’s last championship in 1995, defeating Austin Anderson 57-56 in overtime.

On March 14 during the UIL 5A state championships at San Antonio’s Alamodome, the 1994-95 Bumblebees will be honored for the 25th anniversary of their win.

“It means a lot to me, as a coach, that we are being recognized,” Boutte said. “It means a lot that we were the last Lincoln High School championship team. What matters most to me is looking at where these kids are today. In ’95, when they were playing, they were just kids. They were young men that we were trying to mold into men. It’s something that I think that they’ll never forget as a group. They can sit back and have a chance this weekend to just reflect back on how great it was. How great that accomplishment was, that they achieved in ’95.”

What they achieved was hard-fought. Austin Anderson’s Kris Clack was fouled at the 3-point line with 6 seconds left, and proceeded to make all three free throws, tying the game.

“The team that we played wasn’t just a pushover team,” Keal said. “It was a kind of like a close game that whole entire game. I can remember this game like I played in it yesterday. This game was tit-for-tat, but we were mentally prepared for that. We had close games during our season, so we were prepared for anything.”

Though Boutte admits that even he didn’t quite have a strategy ready for going into overtime.

“Normally you make the game plan for the four quarters, but when the guy hits the three free throws at the end of regulation, you’re just sitting there in the moment going ‘Okay, now where do we go from here?’”

Hardie said it was Spencer Comeaux who spoke to the team’s feelings.

“Comeaux came over and said, ‘It doesn’t matter how many overtimes we play. We’re going to win,’” And he said it with so much dry confidence and believability that kids believed him. We were not getting on that bus back to Port Arthur with that same feeling that we felt the year prior, and we were not leaving without that championship.”

“When you went back to the overtime, you throw out of the window the game plan that you have for regulation. We just had to play the basketball. Trust in the basketball that had gotten us to that point.”

That bus ride home felt a lot better in 1995 than it did the year before.

“It’s kind of like indescribable,” Keal said. “As a kid you sometimes don’t know the magnitude of your championship. You know you won your championship. One of my sons plays for Dallas Madison and it may be a possibility that my son can be in the state finals competing when I get recognized. You can’t explain that. It’s a great feeling though. It’s a great feeling that no one would ever be able to take from me.”

A group from the Golden Triangle is organizing to become the 121st chapter of the National Football Foundation, and on... read more