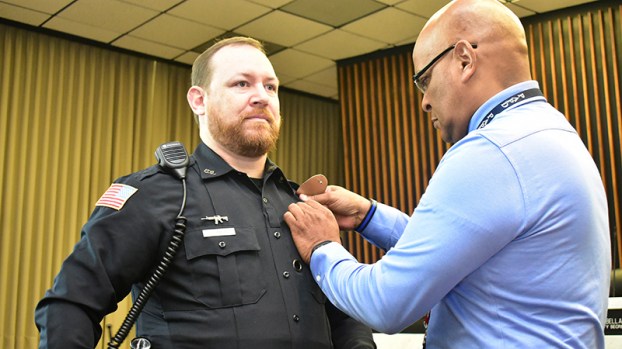 “I’ve always been a graveyard kind of person, working everything from the plants to scaffold buildings to working in nightclubs and bartending, that sort of thing,” Myers said, adding substitute teaching to his verbal résumé. “I’ve kind of worn a lot of different hats.”

Earlier this week, the 1994 Vidor High School graduate was promoted to another hat — sergeant.

Deputy Chief John Owens said during a promotion ceremony for Myers at city hall that becoming a sergeant is not an achievement everyone in law enforcement makes.

“A first-time officer is part of management,” he said. “There are so many sergeants who want to say here’s what to do and then jump in and do it themselves. You have to learn to separate yourself.”

Myers will use his new role, as Owens suggested, to cultivate relationships with residents and businesspersons alike in the city. Owens considers it an act of community policing.

It’s something Myers has taken pride in since he joined the force March 22, 2010.

“I’ve always been big [on forming relationships], not so much as a rookie because you’re focused on learning the job itself, but as I grew as an officer, the more I realized how important it was to speak with community members as a whole, especially business members, and those serving the community themselves and build strong relationships,” he said. “I plan to go forward and continue doing that.”

Myers grew up with what he calls a strong sense of justice, but it took him time to “make the leap” into law enforcement.

“Late bloomer, I guess,” he said. “But once opportunity presented itself, I jumped in with both feet and I’ve been running ever since.”

Now, Myers has a title that he’s worked toward for quite some time.

“This gives me a better opportunity to serve the citizens in a new capacity, and I hope I can live up to the challenge of the new role,” he said. 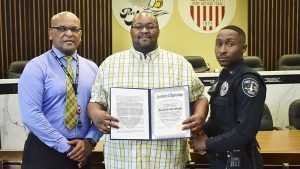 During the ceremony, Port Arthur native Diana Sanchez was introduced as a police aide in the support division, and citizen Jermell Wright was presented with a certificate of appreciation from Officer Isaiah Seltzer for assisting him with an arrest Dec. 8.

PHOTO — Class of ’50 celebrates reunion 70 years in the making