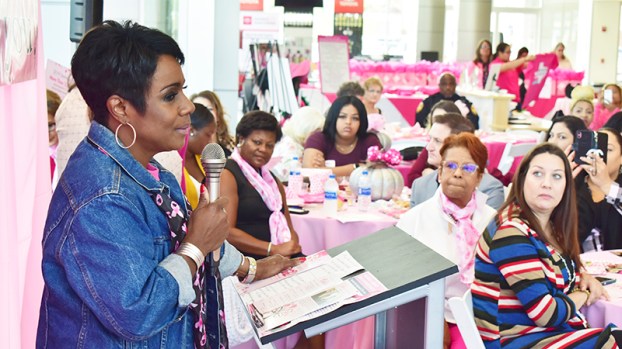 Jefferson County Sheriff Zena Stephens speaks during a “Get in the Pink” luncheon on Oct. 20 at Philpott Toyota in Nederland. (I.C. Murrell/The News) 10-20-19

Three races local to Jefferson County are set for the Nov. 3 general election.

Stephens, who is finishing her first term as Texas’ first female and first African American sheriff, was unopposed in her primary.

Democrat Joe Deshotel and Republican Jacorion Randle did not face any opposition, either, in the District 22 State Representative primary, and are set to square off Nov. 3. Deshotel, 68, has served in the Texas House since 1999. Randle, 21, of Beaumont, studies economics and finance at Lamar University.

Only one of the Jefferson County constable races in this year’s election will come down to a November race. Incumbent Jevonne “J.C.” Pollard won a close Precinct 1 Democratic contest over Donald Jackson by 418 votes.

The Democratic ballot included three races that determined constables for 2021, barring any unforeseen challenges. Christopher Bates in Precinct 2 and Eddie Collins in Precinct 8 kept their seats, while Joe “QB” Stevenson beat incumbent Dana “Big” Baker in Precinct 6 with 57.65% of the vote (2,087-1,533).

Three races on Jefferson County ballots will require a runoff, which is scheduled for May 26.

Four Jefferson County officials were unopposed and are not expected face a challenge in November.

In the Democratic Primary, 11,398 voted early in the county, of which 1,424 ballots were sent by mail. In the Republican Primary, 7,767 voted early in Jefferson, with 113 mail ballots returned.

Runoffs are scheduled for May 26, with early voting from May 18-22.

See what precautions local churches are taking ahead of coronavirus concerns

As coronavirus becomes a household term and people rush to buy hand sanitizer and masks, local houses of worship are... read more