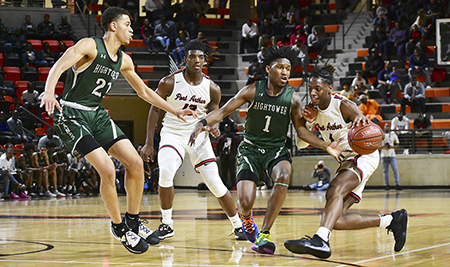 Amaree Abram (1) of Memorial faces a double team from Markel James (21) and Kristopher O’Neal (1) of Hightower as teammate Nate Clover (13) looks on in the fourth quarter Friday in La Porte. (I.C. Murrell/The News) 2-28-20

5A BOYS BASKETBALL AREA ROUND (FRIDAY)

LA PORTE — For 71 minutes Friday night, the Memorial Titans sat together in a locker room, their coaches imparting final words of wisdom before players left to process what just happened.

“Life lessons,” second-year head coach Alden Lewis said, asked what was discussed. “Understanding that a loss is a lesson learned. The lesson was, we didn’t follow the gameplan all four quarters. We played a good first quarter and we got away from it. It was a tough lesson learned, and we learned it [Friday night].”

The Titans, ranked No. 7 in Class 5A, had just taken their earliest exit from the UIL playoffs in three years. Hightower will play Crosby at 7:30 tonight at the Houston ISD Delmar Fieldhouse in the 5A Region III quarterfinals.

Since a controversial loss to Fort Bend Marshall in 2017, making deep runs in the postseason had become the expectation in Port Arthur. Since that time, the Titans have won 11 of 13 playoff games, winning Memorial’s first state championship (and Port Arthur ISD’s 10th) in 2018 and going to the 5A Region III semifinals in 2019. 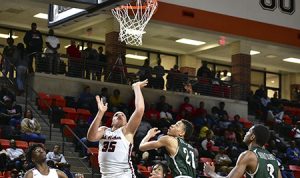 Kenneth Lofton Jr. (35) of Memorial takes a shot as teammate Landin Jackson (14) and Hightower’s Markel James (21) and Ja’von Butler (3) look on in the fourth quarter Friday night in La Porte.

That much success, along with a fourth straight district championship, made the result of a 70-57 area-round loss — albeit to No. 2 Fort Bend Hightower — seem like a premature ending in Memorial’s locker room.

The gameplan, Lewis said, was to limit the Hurricanes’ opportunities in transition and not let them establish a fast pace.

Memorial (29-7) had been successful at La Porte High School’s arena in the area round the previous two seasons, beating Shadow Creek on both occasions. The Titans never led Hightower (30-5) by more than 20-17, and that was midway through the second quarter.

“I was trying to do what was best for the team and help the team to win,” said Lofton, who was held to four points three nights earlier against Friendswood at Lee College in Baytown.

Another sophomore phenomenon, however, took over in the second half.

Hightower guard Bryce Griggs scored 17 of his 25 points in the final 16 minutes. As Memorial led 32-21, his ability to beat double-teams in the half-court offense and ability to attack the rim helped spark a 21-6 Hurricanes run that went into the fourth quarter.

“Looking at the gaps, I saw that I was shooting deep 3s,” Griggs said. “I made one in the first half, but I felt I had to start off in and work my way out. The results fell where they seemed. I made my shots, and they were butter. We came out with the win.”

The Hurricanes led 30-28 at halftime, as 6-foot-8 forward Ja Robertson totaled six of the team’s last eight points before intermission.

“We came back out in the [third] quarter and didn’t execute the plan of what we were going to do to win the game,” Lofton said. “

The loss wrapped up another season in which the Titans reloaded with a heavy senior class — 10 of whom helped make up the 15-man playoff roster. Many of the seniors saw action on the junior varsity level last year as Memorial’s varsity team fell to Pflugerville Connally in overtime in a 2019 5A Region III semifinal. Hightower lost the other semifinal then to Manor.

Included in Memorial’s class of 2020 was center Nate Clover, a four-year varsity player who was nominated for the McDonald’s All-American Game along with Lofton. Clover is headed to Oral Roberts University, and Lofton — who was called up to the varsity during the 2018 postseason — is committed to Louisiana Tech.

“As underclassmen in ’18 when we won the championship, we all just looked forward to keep on playing and practicing hard, fighting through and trying to win another one,” Lofton said. “We came up short.”

Much like Griggs, Abram will have a chance to further cement his status among Texas’ best guards.

“Two more years and averaging more than 20, I’m looking for a lot from him the next two years. He’s a good guard,” Lewis said.

With Abram returning and more young contributors to come, Lewis thinks the Titans can build off this playoff experience for 2020-21.

“Hopefully they learn throughout the year of expectations and what we expect out of them,” Lewis said. “And it’s time for them to get to work and start learning what’s going on and adjust to varsity basketball. We’ll have our ups and downs. We’ll have our bumps and obstacles to cross, but we’ll be fine.”

Chris Smith’s first year as head coach of the Port Neches-Groves boys basketball team has been quite the learning curve,... read more