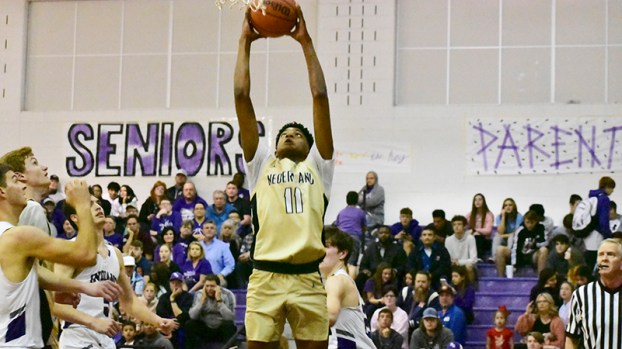 Tyler Jackson, pictured in a Jan. 7 game at PNG, scored 13 points against Shadow Creek on Feb. 28 at Barbers Hill.

5A BOYS BASKETBALL AREA ROUND (FRIDAY)

A strong Shadow Creek defense made scoring tough for the Nederland Bulldogs during Friday’s area round playoff game at Barbers Hill High School in Mont Belvieu.

The Bulldogs ended their season after the 46-34 loss on Friday with a 27-10 record. The Sharks kept the usually robust Nederland offense below 40 points for the first time since Jan. 21, when the Bulldogs lost their only District 21-5A game against Memorial 56-39.

“They had some good athletes and did a great job with their defensive game plan,” Nederland coach Brian English said. “We had some struggles scoring, and we knew going in that we had to do some different things to score. They did a real good job.”

“Tyler played really well for us,” English said. “He had a great year, and he finished strong.”

English was pleased with the effort his Bulldogs put forward, despite the loss.

“I thought we competed really well,” he said. “We kept it close and had our chances. With 4 minutes left we were only down six, so we just need a couple more shots to fall. Then we had to foul late.

“I liked our kids’ fight. That’s what we talked about going in, is we had to fight and I thought we did a real good job with that.”

Next year’s Bulldogs will have to fill openings left by Pete and Hefner, both graduating seniors. Hefner will be playing basketball for Texas A&M next year.

“It’s going to be tough to replace some of our kids,” English said. “It kind of happens every year. Hopefully our young kids have learned a lot from our seniors going out, how to work, how to focus and how to take things serious when we need to be serious. We’re looking forward to the next couple of years.”

Jackson, along with fellow juniors Joseph Gipson and Joey Hebert will make up the new leadership for next year’s team, English said.

“Tyler and Joseph had really good years for us,” English said. “They’ve been starting for us for a while. Joey brings some leadership for us, and we got a couple more sophomores good minutes this year. We’re going to have some good experience coming back, and we’re going to add some good kids from our JV team to them. It’s going to be interesting.”

English appreciates the quality of team he was able to coach this year.

“I think our character was really good throughout the year,” he said. “The kids worked hard at practice and won some big games, and just overall I thought we had a successful year.”

LA PORTE — For 71 minutes Friday night, the Memorial Titans sat together in a locker room, their coaches imparting... read more