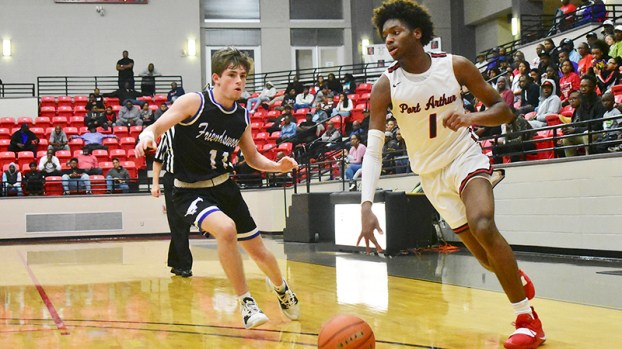 Amaree Abram of Memorial drives to the basket against Gracen McGregor of Friendswood in the third quarter Tuesday at Lee College in Baytown. Memorial opened up a 34-29 lead from this point to win 62-35. (I.C. Murrell/The News) 2-25-20

Amaree Abram propels No. 7 Titans; Next up No. 2 Hurricanes on Friday night

BAYTOWN — Eleven days had passed since No. 7-ranked Memorial last played, so a little rust had settled before the Titans’ 5A bi-district game against Friendswood on Tuesday.

Tenth grader Amaree Abram kept attacking the basket even as Port Arthur’s team fell behind 18-10 at one point, but the Titans found their defensive groove and capitalized big-time on their way to a 62-35 victory over the Mustangs at Lee College. Abram finished with 21 points, 12 of which he used to key Memorial’s 34-9 second-half rout.

“I just let the game come to me,” Abram said. “We missed shots early on and we got transition buckets. That’s how I got some of my points. My teammates got me open.”

Next up for the Titans (29-6) is a showdown against No. 2 Fort Bend Hightower (29-5) at 7 p.m. Friday at La Porte High School. Memorial hopes to win an area round game in that venue for the third straight year, after having dispatched Shadow Creek in 2018 and 2019.

But in each of those years, much like Tuesday, the Titans’ bi-district contest was not a cakewalk, at least from the tip. They trailed 18-10 with 7:16 left before halftime, but Abram kept attacking the lane and eventually scored on three straight possessions to help Memorial retake the lead 19-18.

Kenneth Lofton Jr. drove to the basket for a dunk with 30 seconds left in the frame, only for Luke Lipetska to narrow Friendswood’s deficit to 28-26 on a reverse layup 12 seconds later. The score held up at intermission.

Memorial got its 34-9 second half going by settling into its brand of turning defense into offense. Friendswood (19-16) pulled within 34-29 with 4:26 left in the third quarter but came no closer and made only one other field goal from there in the fourth quarter.

“Push the ball in transition, get easy looks and get stops,” Abram said, recalling Lewis’ halftime message. “That’s how we went up by 13, 14.”

Nate Clover had 17 points for the Titans, while fellow McDonald’s All-America candidate Lofton was held to four points. Abram, who’s averaging 19 points, four rebounds and four assists per game, said he feels the responsibility to pick up some of the scoring as opponents turn their focus on Lofton.

“That opens up the lanes for me and others,” Abram said.

Jaylon Hughes and Asaad Bodden each had four points for Memorial.

Savion Skeete led the Mustangs with seven points. Three others each had six points in the loss.

The Hurricanes are sparked by another stellar sophomore in Bryce Griggs. The 6-foot-1 point guard, who like Abram played on varsity as a freshman, has “warm” interest in the University of Houston, Kansas, Oklahoma State and Texas Tech, according to 247sports.com.

“They’re a top-three team in the state, so apparently they’re really good,” Lewis said. “They’ve got one of the top players in the state. So, we’ve got to start tonight preparing for them. Hopefully, we’ll give them a good game and pull it off. But they’re a pretty solid team.”

Shadow Creek, presently ranked No. 3 in 5A, and Hightower shared the District 24-2A championship; Shadow Creek won the first meeting in Pearland on Jan. 10.

Climbing the hill: Seahawks hope sweep is sign of progress

The Lamar State Seahawks’ weekend sweep of Kilgore was a big deal, head coach Vance Edwards said. “It was an... read more