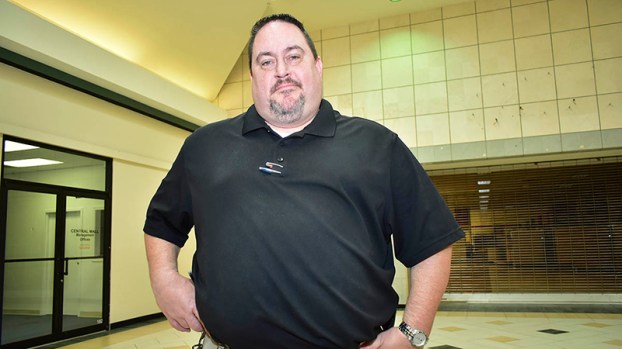 New Central Mall manager Benjie Pinell first worked at the old Sears, which was located to the right of Pinell, when he was 16 years old. Pinell’s office is located to the left. (I.C. Murrell/The News) 2-20-20

When he was 16, he went to work there as an appliance salesman at Sears. Now at 47, Pinell works in an office just adjacent to where Sears was located as the mall’s manager.

“I was born and bred here,” the lifelong Nederland resident said. “This has been my mall since it opened in 1982. I rode my bike here. I remember staring out of the gates of Sears, watching them put the tiles in for the floor and setting up the mall.”

Pinell is operating the mall under the ownership of the Kohan Group, which recently bought the mall from JLL, a real estate firm that held the lease but did not perform day-to-day operations. A close friend of Pinell’s told him about the opening and recommended him.

“Now that there’s an owner that owns the mall, I’m able to make a lot more changes,” Pinell said. “With refinery expansion, we want to be able to bring more people to Port Arthur. While bringing them here, we want to give them a mall that they can come in, shop and do everything they need to do. I’m trying to get up to 85 or 90 percent occupancy, so we can bring some more mall stuff back.”

And he has a team to help him, including security supervisor Kiven Broxton, housekeeping/activities leader Michelle Janise and accounts/office manager Cindy Berry.

Janise assists Pinell with organizing prize promotions and activities inside and outside the mall.\ 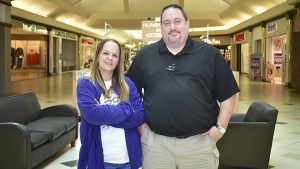 Since taking over Jan. 2, Pinell has already closed on three new leases and is waiting to finalize some more. Among the latest additions are Mexican authentic clothing and art store Rico’s, Harrison’s Barber College and American Seafood restaurant.

Pinell is also been talking with Parkdale Mall in Beaumont about possible joint leases for other stores.

Pinell wants to convert the parking area for Sears into a lot where refinery workers will be shuttled back and forth from work.

Central Mall has just organized a Valentine’s Day prize giveaway and will soon begin a St. Patrick’s Day promotion for children. On March 14 starting at 2 p.m., a “Bingo Paddy Party” will include Bingo and arts and crafts. The actual St. Patrick’s Day is March 17.

“We’ll have second chances to win prizes and stuff like that,” Janise said. “I’ve got the fliers already made and I have donations from each of the food courts.”

Visitors to the mall in April can look forward to a Jurassic Empire exhibit featuring animatronic dinosaurs, as well as Easter-themed activities including a blue-egg hunt.

“It’s going to be kind of like a scavenger hunt where you would find such-and-such, like a Nike,” Janise said. “They have to search all three stores in order to find the blue egg and so forth like that.”

Pinell is also inviting food truck owners and potential car show participants, among others, for more activities to come.

A 1990 Nederland High School graduate, Pinell came back to Central Mall from Target in Beaumont, where he was a property manager. He was also co-director for Beaumont’s Circuit City and manager at Lowe’s and Marshalls.

Quite a career for the 1997 graduate of the Regional Police Academy at Lamar Institute of Technology.

“Instead of staying in any form of law enforcement, I’ve been in retail and I’ve stayed in retail ever since,” Pinell said. “Everything I’ve done has been as a manager.”

For sure, Pinell knows he’s right at home at a place that’s grown on him from the time it first opened.

“A lot of folks that are born in this area or stay in this area, they don’t really leave this area, or if they do, they come back,” he said. “I can’t tell you how many times I hear the saying, ‘Can you bring the mall back to how it was?’ That’s exactly what I want to do.’ I have so much vested interest in the mall even before I took the position.”

Recently released 2019 statistics for the city of Port Arthur show a drop in most major crimes. Homicide has remained... read more