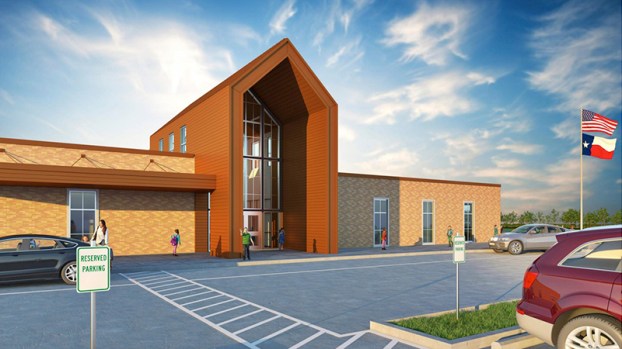 The main entries for Helena Park Elementary, Hillcrest and Highland Park will have a similar structure. (Courtesy image)

NEDERLAND — The Nederland Independent School District’s Board of Education was presented with the final design development presentations for the upgrades to the four existing elementary schools this week.

NISD voters passed a bond proposition in May for $151.1 million to construct a new Nederland High School and make upgrades to the existing two middle schools and four elementary schools.

Simpson is right on schedule. 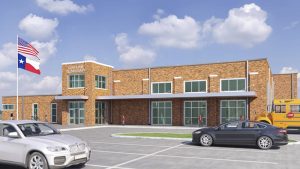 Upgrades and new construction for all four elementary schools — Helena Park, Highland, Hillcrest and Langham — will total approximately $49.1 million ranging from $10-11 million each.

Plans were officially approved Tuesday, moving the project into the next phase.

“We are right where we need to be,” Simpson said. “We are on schedule.”

The next step is construction mitigation.

“(NISD) is now in construction document phase or what we call the ‘blueprint phase,’” Simpson said. “It’s the phase where we are making detailed drawings, making specifications for fabricators, dealing for construction bids and beginning work with the general contractor.”

Simpson said this phase is estimated to take four months, with early construction of the elementary campuses to kick off mid summer. 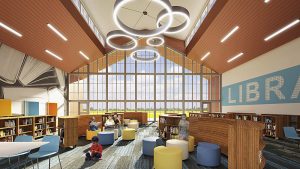 “We have several projects, and they don’t all happen at the same time,” he said. “The documents for the elementary schools are in the ballpark of taking four months. They will be staggered by about a few weeks each so that they don’t all come out at once. It will give the marketplace some room to bid.”

The schematic design of the high school has already been approved as well and is heading into the design development phase.

“Right now, we are working out the design plan, getting the site plan nailed down and deciding where all the main components will go,” Simpson said. “That is in the process of being developed. The next presentation we bring to the board will be in detail and include photo-realistic renderings for the inside and outside of the building.”

The stadium upgrade is also underway.

Simpson said they are hoping to have the artificial turf installed and ready to be played on by the start of the new school year.

As the finishing touches are being placed on the stadium, the design phase for the two middle schools — Central and C.O. Wilson — will begin.

According the architects’ projected schedule construction will start with Langham Elementary this summer with the demolition of the existing one-story classroom buildings.

“It’s a difficult, kind of hairy process,” Simpson said reflecting on the project’s progression. “It looks linear on paper, but in reality you have a whole lot of form-influencing factors. You have a lot of different things that have to be woven together. That takes time and it is never the first drawing you come up with.”

Assistant Superintendent Stuart Kieschnick said the board is excited to be moving along in the building process.

“We are starting to move forward and now we can start getting some hard prices and move everything along,” he said. “We just approved the elementary campus designs and we like what we see. Now, we are moving along to the stadium to get new turf and widen the stands.”

Simpson said the response from NISD during the process has been positive, and he is ready to take them into the next stage.

Wanda Bodden spent a long career as a nail technician for Seche International. The company is known for its quick-dry... read more