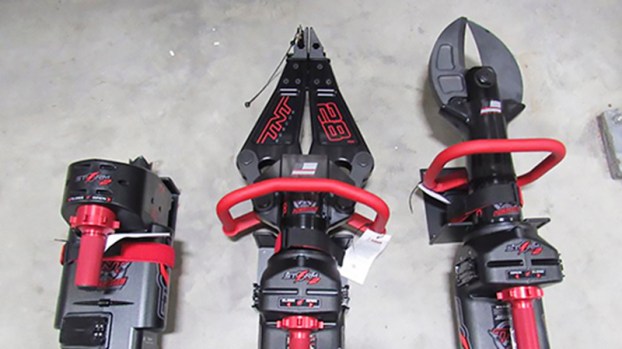 Jefferson County Water District No. 10 Volunteer Fire Department is the recipient of a Texas A&M Forest Service grant and purchased a ram, left, spreader and cutter for their Jaws of Life equipment. (Courtesy photo)

Three-tool “Jaws of Life” saves lives in Water District No. 10

NEDERLAND — A local group of first responders added new tools to its collection of life-saving equipment.

Jefferson County Water District No. 10 Volunteer Fire Department is the recipient of a rescue equipment grant from the Texas A&M Forest Service.

The grant will be used to purchase tools to remove occupants trapped in motor vehicle crashes, according to Water District No. 10 officials.

The benefit, he said, is to better enable the department to save lives of people involved in crashes and extricate victims from vehicles.

Sometimes called the “Jaws of Life,” the tools include three parts.

The new equipment pieces are battery-powered tools and do not hook up to hydraulic pumps like older ones.

“That way you are not limited because of your hose line or your pump,” he said.

Wood has been with the volunteer department for 20 years and is noticing more traffic on the roads, adding crashes have “definitely increased, mainly because of distracted drivers.”

“Back then, we didn’t have cell phones and technology like we do today,” he added.

Water District No. 10 VFD has 12 firefighters and three auxiliary members. The auxiliary members are the ones who can’t do the actual firefighter job but can come to the scene, especially if they will be there a long time, and bring bottles of water and sometimes food.

This isn’t the first time the VFD received a grant to purchase valuable equipment. In 2012, they purchased a fire engine through a Texas A&M Forest Service grant.

“We are thankful for the Texas A&M Forest Service Grant Program,” he said. “Because us departments in the county can’t afford $30,000 worth of rescue tools. That’s a lot of lot of money to a little volunteer fire department.”