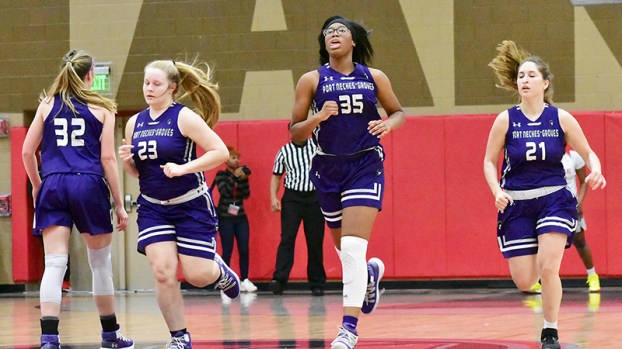 GIRLS ATHLETE OF THE WEEK — Much to celebrate: PNG’s Amonti Edwards gets No. 2 seed Indians going

Amonti Edwards’ parents often tell her to save the celebrations until the game is over.

Those celebrations, though, do wonders to get her and her team hyped and raring to go, especially for Edwards.

“Amonti likes to celebrate — it’s what she’s good at, and she feeds off of her teammates and they love it when she gets going like that,” Port Neches-Groves head coach Kara Skinner said. “She likes that and it gives her some energy. If she gets something to celebrate about, she’s going to celebrate and then everybody’s going to react. She thrives in that setting.”

Thrive is exactly what she did on Friday. Edwards came off the bench to put up 11 points and racked up 14 rebounds during the Indians’ 63-37 win against Dayton during a tiebreaker game for District 21-5A’s No. 2 playoff seed at Barbers Hill High School.

“Friday, I did well,” Edwards, The Port Arthur News Girls Athlete of the Week, said. “I got some good defensive stops, blocks and some assists. After I scored, I did a dance. It pumps me up a lot.”

Edwards was joined off the bench by big performances from Avery Girouard, who scored 12 Friday. Mollee Priddy led the way with 19 and Maylin Stampley brought in 10.

Edwards, a freshman, says the encouragement and support from her teammates is what helps her have success.

“I practice a lot with my teammates,” Edwards said. “We count on each other, so it kind of makes me more confident when playing against other people. It’s exciting. At first I’m nervous, playing with older people. Sometimes it’s tough.”

Skinner said Edwards’ success is cycled back into the team as they root for her.

“She’s a spark for us when she comes off the bench like that,” Skinner said. “All the kids are pulling for her. She’s a freshman on varsity. We have a couple of them now, but when she comes in and has a big game like that, I think it does a lot for the energy of our team, and of course we love her celebrations so much.”

Skinner feels that if the Indians continue to see major contributions from players like Edwards and Girouard, her team should do well in the playoffs.

“That’s been my challenge to this team the whole season — step up — because that’s what we need,” Skinner said. “I thought they really took that to heart. If we play like that, if we have kids that keep doing that, then playoffs look good for us, especially first round. We’ve got some confidence going in off of that game on Friday, for sure. I think when your bench gets involved in the game, it’s a big help.”

PNG faces Galveston Ball at 6:30 p.m. tonight at East Chambers High School in Winnie. Ball eliminated PNG last year, but the Indians faced the Lady Tors earlier this year at the Brazosport tournament and defeated them 43-40.

Skinner says the PNG squad knows the Lady Tors well and should be ready for them.

“We know kind of a lot about them, actually. It’s just a matter if we show up and we execute,” she said.

I have always heard that a dog was man’s best friend, and in some cases I can see where that... read more