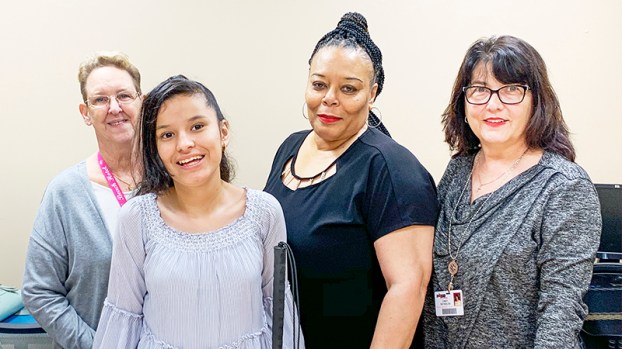 Sidney Navarro is blind. She came to Port Arthur eight years ago from Mexico knowing very little of the English language and even less on how to operate Braille in Spanish.

Today, the 14-year-old speaks three languages, reads and writes fluently in Braille, plays piano, sings, reads and excels academically as one of the top 10 students at Memorial’s Ninth Grade Academy.

“My name is Sidney Navarro and I am in the ninth grade. I am in all AP classes and I take a college course in human geography. I play piano. I take French and music. I went out for the homecoming court and I got princess. I’ve gone to competition for UIL and Solo and Ensemble. I can do anything I set my mind to,” the ninth-grader recently said when asked to describe herself.

The current Port Arthur resident uses a mixture of technology and devices to guide her along in studies, including an embosser and the Tactile Pro, the first tablet in the world specifically designed for the visually impaired. 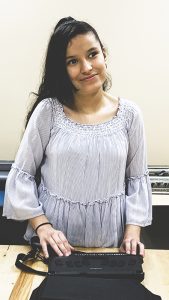 Sidney Navarro demonstrates how to use the new Tactile Pro.

“I use it for research,” she said. “When I go home and have to do homework, like a project on picking adaptations for biology, this is what I use. All my textbooks are on here, books I like to read and I can listen to music. I can surf the Internet and everything. It even has a calculator I’m learning to use.”

Navarro is an Advanced Placement student and taking college courses online. She hopes to become a psychologist someday.

Outside of academics, Navarro weaves bracelets, rides rollercoasters and reads. She does not let her visual impairment dampen her ambition or her spirit.

“I do all this stuff because I love it, but there is another motivation behind it,” she said. “I want to show other people with disabilities that there are no limits. That’s how I was taught as a kid, so I want to show them that you can do whatever you want. Nothing’s impossible and that’s why I go to a competition, that’s why I tried for homecoming, that’s why I take AP classes. That’s why I do everything; I want to let others know to not give up.” 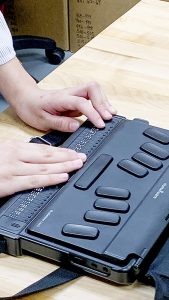 Sidney Navarro received the Tactile Pro, the first tablet in the world specifically designed for the visually impaired.

Navarro said she wants to thank her team and the group of people who make it all possible including Cindy Reynolds, Port Arthur Independent School District’s teacher for the visually impaired; Pamela Dorcey, paraprofessional; and Dewana Burnham, braillist.

“This is a team effort,” Reynolds said. “We are truly a team. Nobody gets to have one whole bunch of credit. We are all a team and Sidney is the integral part of that team.”

Reynolds has worked with the visually impaired for 35 years. In all that time, she said she has never been more proud of a student.

“In my life, this is one of my greatest accomplishments,” she said. “Sidney has kept me on my toes. She has taught me so much and as much as she’s learned from me, I’ve learned just as much from her. She’s taught me perseverance.”

As Navarro prepares to join the Memorial High School campus next fall, she looks up to the accomplishments of Helen Keller and Ray Charles, living by these words — “The best and most beautiful things in the world cannot be seen or even touched but they must be felt in the heart.”

The Port Arthur Beautification Committee is giving four students a once-in-a-lifetime opportunity to make their permanent mark on the Port... read more