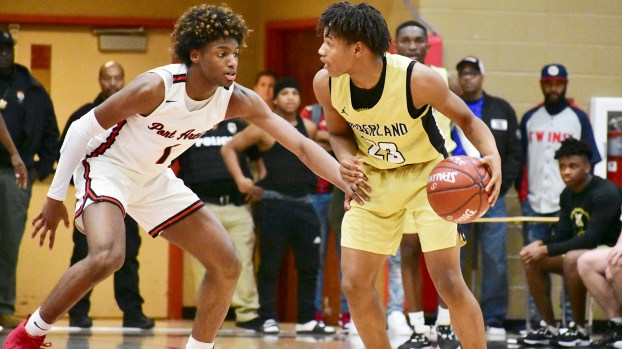 It’s official — the Memorial Titans and Nederland Bulldogs will not meet for the third time … yet.

Despite Nederland clinching a share of the District 21-5A championship Tuesday, the head coaches for both teams have agreed on seedings for the UIL 5A boys basketball playoffs, which tip off next week. Memorial (28-6, 11-1 in 21-5A), which had clinched the other share before a home loss to Nederland last Friday, has taken the No. 1 seed and will face off against 22-5A fourth-place Friendswood at 7 p.m. Feb. 25 at Lee College in Baytown. Nederland (26-9, 11-1) will take on 22-5A third-seed Galveston Ball on that date, but time and location have yet to be determined.

The Bulldogs had last won a district title in 2012.

“We had talked earlier with the discussion of playing a tiebreaker, but we mutually agreed on doing the seeds,” Memorial coach Alden Lewis said. He added the Titans’ 56-39 win at Nederland on Jan. 21 was bigger than the Bulldogs’ 46-43 victory in Port Arthur had nothing to do with earning the No. 1 seed.

Bulldogs coach Brian English said his team was more familiar with Ball than Friendswood, having scouted the Tornadoes last week. Lewis agreed with English that factored into the decision.

There is a chance Memorial and Nederland could hook up for the Region III championship, the fifth of seven playoff rounds. The Bulldogs are looking for their first playoff win since 2014, while the Titans are going for their second state championship in three years.

Potential opponents for both Memorial and Nederland in the area round are not yet known.

It’s been eight years, but the Bulldogs finally finished on top of a district again, albeit with one other team.

Behind Hayden Hefner’s 18 points, the Bulldogs scored a 67-38 home victory over the Eagles on Tuesday. Tyler Jackson scored 12 points and Joseph Gipson had 11 for Nederland.

In Port Neches, the host Indians overcame a 19-11 halftime deficit to punch the fourth and final playoff ticket from District 21-5A.

PNG (14-19, 5-7) achieved a first in its boys basketball history by clinching a second consecutive playoff berth. It also marks just the seventh appearance in program history.

PNG earned the season sweep over Cleveland (10-12, 4-8) and ended the visiting Indians’ season for the second year in a row. PNG won a fourth-place tiebreaking game last year in Lumberton.

Statistics from Tuesday’s game were not available, but first-year head coach Chris Smith said PNG made free throws down the stretch to hold off Cleveland.

PNG will play either Crosby or Texas City next week in the bi-district round.