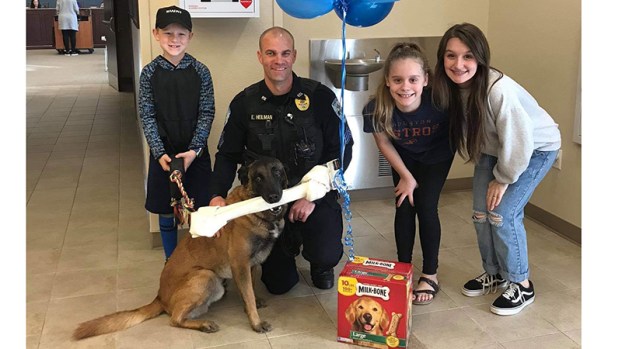 “I knew I wanted to give back to the community but I didn’t know how,” she said. “So I let my kids decide, and they chose to give back to Officer Rico, because that’s their favorite officer.”

Mercer raised money in her spirit shop by setting aside a portion of proceeds from doll outfits sold in the store. The mini fundraiser raised $265 during 2019. 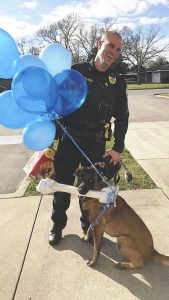 “It was really neat,” Heilman said of the surprise. “That stuff is always unexpected, and it’s nice to have the community support, as well to make a program successful. It’s a good feeling.”

Mercer said the concept started as a way to teach her three children — Camryn, Caylee and Caden — how to give back.

“I’ve been in business for almost two years,” she said. “I wanted something to get my kids involved with in the store and teach them the importance of giving back. It was a learning thing. It’s such a small town and it was just a small gesture in showing our community that we care.”

Mercer and her children chose Officer Rico, because they often watch Live PD at home and their favorite episodes are with K-9 Officers. 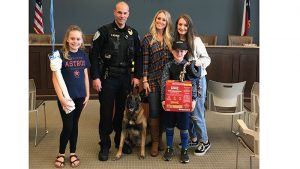 They also grew up to love the four-legged detective after Mercer spent a short time working as a receptionist at PNPD.

“When I worked there, I adored Rico and my kids loved Rico,” she said. “So they were pumped up to finally give him these gifts. After all, Rico is so sweet. He’s raised with two girls at home, so he’s kid-friendly and knows how to turn work on and off. He’s just amazing and we are glad we got to something like this for him.”

Heilman said Rico is an extremely hard-working canine and is currently enjoying his well-deserved rawhide bone.

“These dogs are really only limited by our imagination and that’s what they live to do,” he said. “He’s an excellent partner and he doesn’t get treats like that too often, but he takes advantage of it when he does.”

Port Neches community rallying for day of prayer on Sunday