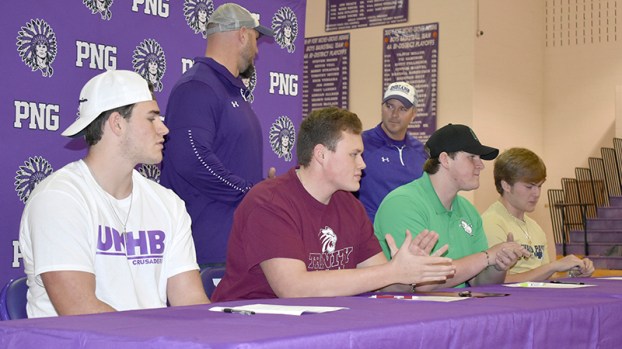 It was an extremely important day for the Port Neches-Groves football program, head coach and athletics director Brandon Faircloth said.

Four Indians signed letters of intent to play football at the college level on Wednesday during a ceremony in the PNG High School gym.

“It’s just a day of hard work paying off and dreams coming true,” Faircloth said. “Those five guys are leaders in our football program, hard workers, great in the classroom, just doing everything the right way. I’m extremely excited for them and their families. Playing college football is a big deal, and it’s an opportunity that not many kids get.” 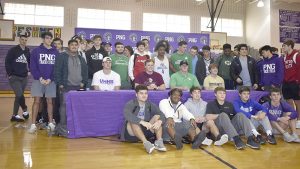 Four Indians from Port Neches Groves, from left seated at the table, Josh Patteson, Trey Lisauckis, Jarett Caillier and Caison Denzlinger, sit surrounded by their fellow teammates as they sign to play football at the college level.

Patteson, who was named first team All-District and to The Port Arthur News Super Team, said Mary Hardin-Baylor has a winning program that made him feel at home.

“They’re straight business there, and they’re doing a great thing over there,” Patteson said. “They’re winning national championships, so that’s where I feel at home.”

He said he struggled to regain his recruiting prospects after suffering a shoulder injury last year, but that his hard work paid off.

“It took blood, sweat and tears, grinding everyday,” he said. “Last year I tore my shoulder so any coaches that were looking at me, they just weren’t there anymore so I had to restart my recruitment and got where I was today.”

Lisauckis was also named first team all-district and to The Port Arthur News Super Team, and was an academic elite All-State selection. He wants to study computer science at Trinity.

“Trinity has one of the oldest standing and most prestigious computer science programs in the state, so I think it’s going to be a great fit for me academically and athletically,” he said.

Lisauckis enjoyed the struggle all the way to his achievement.

“It took lots of hard work, doing what Coach [Peter] Medlock told me to do, day in and day out, putting in all the extra work coming up here by myself doing what I got to do, and just persevering against lots of adversity, but its fun so I really enjoyed it and I’m ready to keep going,” Lisauckis said.

Caillier, an honorable mention All-District selection, will be studying wildlife and fish management at Arkansas-Monticello, since he’s an avid fisherman. Monticello gave him a great welcome, he said.

“It just felt like home,” Caillier said. “On the visit it was just great hospitality, just didn’t even feel like I left Port Neches. Everyone was so welcoming and the coaching staff was awesome, facilities are great.”

Like others, Caillier spent a lot of time and effort, even outside practice times, to get to Monticello.

“It took training on the weekends, driving to Houston every other weekend for drills and different coaches helping me out, especially the coaches at the school, always riding me to be my best,” he said.

Denzlinger started as inside linebacker in all 11 games in 2019. He feels he had a great season and appreciates the opportunities he received.

“I didn’t have as many opportunities as other kids, but I just kept fighting and eventually I got my shot and I made the most of it,” he said.

As a private Christian school, Denzlinger thinks Howard Payne is a great fit.

“It’s a school where the teacher/student ratio is really low, so I’ll be able to get one-on-one help and get a good education,” he said. “I’m going to be studying kinesiology and physical education to become a coach eventually.”

Faircloth said the PNG program intends to get students well prepared, and that the students taking their next step is a testament to the effectiveness of the program.

“When they get here in seventh grade, we try to prepare them in three ways: Physically, we make sure they’re hard workers, which they are; academically we make sure they have good grades, SAT and ACT scores; and socially we make sure we’re producing leaders and guys that can go on to be successful in life,” Faircloth said. “When you do those three things, and you have guys like that that who come from great families and are hard-working and do things right, it’s a good combination and it helps you be successful.”