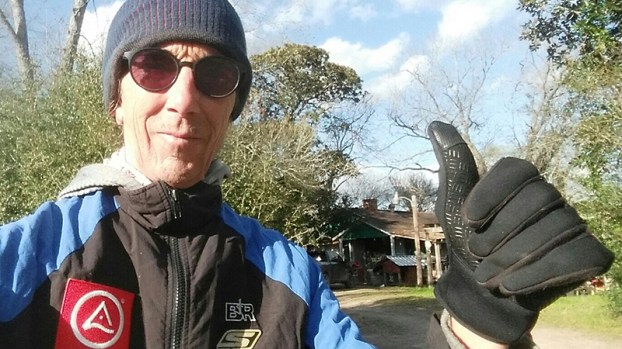 I like sticking to a pretty specific Saturday morning routine when family or work don’t demand otherwise.

It’s a simple program: Get up early, preferably before the sun rises, lace on my running shoes and head out on the nearly empty roadways for some light-to-intense jogging.

Enjoying the sunrise in the process is a truly special experience. I always feel better about myself after a good morning run.

As an amateur jogger, I’ve grown to appreciate the true professionals who take running to whole other levels.

They strive for personal bests in marathons across the country and log so many doggone miles that you wonder how they find the time. In short, I envy their effort and stand in awe at their determination.

Dave Dial is one such runner.

He was star track athlete for Nederland High School in the late 1970s (his brother, Dale, would later coach at the school) and was particularly impressive in the 1980 Boston Marathon, when he finished 42nd as a 19-year-old.

We’ve been communicating by phone and email since Jan. 25, when Dale first reached out to The Port Arthur News to talk about his latest running accomplishment.

He was nearing 200,000 miles run and logged over the course of his lifetime.

He spends his days watching over land and cattle that belong to his father. Much of his free time is devoted to running and the sport in general.

Dave works with shoe companies, road testing their prototype footwear, offering feedback on how to best create the running shoes that eventually flood the global market.

His special story and impact will be featured in the next Greater Port Arthur The Magazine, which publishes in March.

While looking to put Dave’s accomplishment into perspective, I reached out to four-time Boston Marathon winner and former Olympian Bill Rodgers, perhaps the most knowledgable American distance runner.

He also happened to be a longtime friend of Dave’s.

Rodgers said Dave was determined as a young kid, displaying unique focus to keep track in detail of what he was doing.

“It’s not like he is going to get a gold medal at the end,” Rodgers said. “It’s not the Olympics. It’s more of a personal goal. It’s part of running. Runners are like this, but very few are going to be able to reach that kind of number. First, you have to be able to handle it physically. You have to want to push that hard. That’s way, way up there. Dave is one of these people that has that kind of focus.”

Both men have stayed in touch and worked together during the course of their 40-year friendship.

Rodgers describes Dave as quiet, alert and on the ball — a real runner’s runner who knows the sport inside and out.

His best story centered on the time Dave drove from Texas with some sort of wildcat in his car to visit running buddies up north.

“He drove up from Texas with the cat, and everyone was a little worried,” Rodgers said. “He had this wildcat in the backyard. It was like a cougar, watch out. That’s how runners are. They like to be in the outdoors. They like wildlife.”

Stephen Hemelt is the publisher of The Port Arthur News. He can be reached at 409-721-2445 or at stephen.hemelt@panews.com

The message I wanted to convey to members of the Sertoma Club over a Thursday luncheon would be postponed for... read more