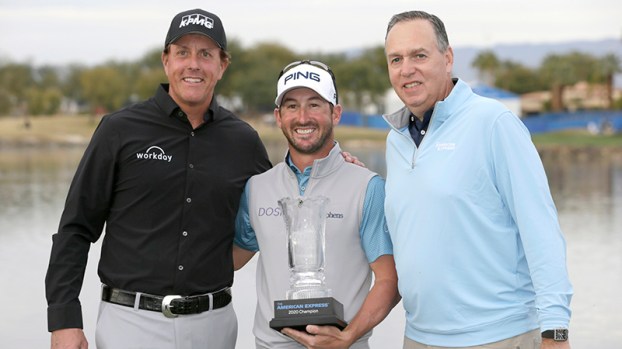 Next time he wins on the PGA Tour Andrew Landry would prefer it to happen with considerably less drama than transpired late in victory No. 2 Sunday at the America Express Championship in La Quinta, California.

Ahead by six shots with six holes to play, Landry saw the lead disappear in three holes. Facing intense pressure, he responded with back-to-back birdies on 17 and 18 for a closing 67, a 72-hole total of 26-under-262 and a two-stroke edge over fast finishing Abraham Ancer.

“I’ve seen rollercoaster finishes like that but I haven’t been part of them,” said a relieved Landry. “I don’t like being part of them. I told my caddie on No. 15, I said ‘Let’s go and get this job done and quit messing around.’ I don’t want to be part of something like that ever again.”

Three straight bogeys, after he’d made only two the first 66 holes, combined with Ancer’s charge, turned Landry’s walk in the park into a potential horrific finish. Disaster was averted, however, with perhaps the most clutch shot in his life – an 8-iron to 6 feet, 10 inches on the treacherous island 17th, also known as Alcatraz.

Landry buried the putt, laced his drive down the middle on an 18th hole with water down the left side, stiffed a wedge to 6 feet and rolled in his tournament best 31st birdie of the week. The immediate reward for the Port Neches-Groves ex was a check for $1.2 million.

Perhaps more important, the victory guaranteed his PGA Tour card for two years and got him back into the Masters and the 2021 Tournament of Champions. He also moved from 170 to 17 in Fed Ex points and from 240 to 107 in the Official World Golf Rankings.

Making the win even more special for Landry was the presence of wife Elizabeth and 21-month-old son Brooks, who came toddling out to hug him behind the 18th green.

The victory was somewhat shocking, considering Landry had missed seven of eight cuts in the 2019-20 season, including the last five. But the California desert is a happy place for Landry, after finishing second in 2018 and 28th last year.

“This is one of the greatest feelings,” said Landry. “It’s what we play golf for. Winning out here is hard. It’s hard when you have a big lead and start playing defensive. Instead of being defensive you need to be playing more aggressive and just keep hitting the shots you need to hit.”

Landry, who started the day tied with University of Texas ex Scottie Scheffler, took the lead on the first hole, was three ahead after a front nine 33, then looked like he’d delivered a knockout blow with three consecutive birdies to open the back. That stretched the lead to six

It all got away in about 40 minutes of real time as Ancer, on the way to a course record 63, kept pouring in birdies and Landry stumbled to bogeys on 13, 14 and 15. As he was moving to the 16th tee, Ancer dropped a 25-foot birdie at 17 that left both players at 24 under.

So, in a situation that would have broken many players, how did Landry manage to regroup? His caddie, Terry Walker, had the answer.

“He’s a bulldog,” said Walker. “He’s tenacious. He doesn’t back down. He’s going to go out and, if the chips are down, he’s going to get the job done.”

That’s exactly what Landry did. He narrowly missed birdie on the par 5, 16th, then slammed the door with the birdies on the difficult 17th and 18. Landry called the 8-iron into 17 his shot of the tournament. And he said what he unwillingly went through is going to make him a better player.

“Experience makes so much difference,” he said. “You look at the top players in the world and they have a lot of experience being up there and being in the final group and a lot of experience winning. You take a day like this, you just build from it, think back on what you did, what you should have done differently.”

In the end, the difference for Landry was deadly putting. With 27 putts Sunday, he finished the tourney with 99. Only four other players this season have gotten through 72 holes with less than 100 putts. By round, he took 27, 24, 21 and 27.

In shooting scores of 66-64-65-67, he finished No. 1 in birdies (31) and putts per greens hit in regulation and No. 6 in strokes gained putting. He wound up missing Patrick Reed’s tournament score record by one shot.

Andrew Landry took all his fans in Mid-County on an agonizing thrill ride Sunday afternoon before closing out his second... read more