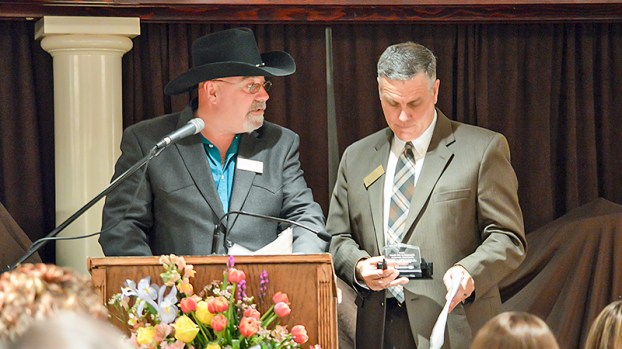 Nederland businessman and Southeast Texas Patriot Guard Riders member Mark Stratton was seriously injured when his motorcycle was struck by a vehicle near Buna on Saturday.

The crash happened on Texas Highway 62 near Buna. Stratton was riding back from the Jasper area after volunteering his time with the Patriot Guard Riders for a funeral for a veteran, his son Curtis said.

“Thankfully there was no head trauma or any other broke bones,” Curtis Stratton said. “His left leg took the brunt of the wreck. He had emergency surgery Saturday night on his foot. It was mangled pretty bad.”

The elder Stratton lost a portion of his foot and was scheduled for another surgery on Monday to determine if he will lose his leg.

The car following the one that reportedly struck Stratton stopped and rendered aid. The Good Samaritans were a pastor and wife from Buna who pulled over and stayed with him and put a tarp over him because it was raining. They also blocked the road to make sure now one would run over debris and waited with him for emergency personnel.

Curtis said the vehicle that struck his father did stop. 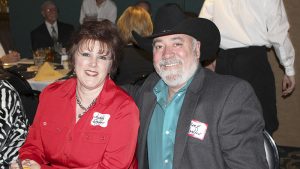 Annette and Curtis Stratton are pictured in 2014. (Courtesy photo)

Curtis said his dad has had a motorcycle license since he was about 16.

“He loved being part of the Patriot Guard Riders and do service for people who go out and service our nation,” Curtis Stratton said.

Stratton also took part in the recent homecoming of a Korean War veteran who was finally laid to rest locally.
Emmett Hollier, Nederland city councilman and also a PGR, said Stratton is an all-around good guy.

“He’s been involved with Nederland Chamber for a good while and with other chambers and definitely instrumental in helping the chamber with the Heritage Festival,” Hollier said. “He’s an all-around good friend, and definitely as soon as I heard (about the wreck), I started asking folks for prayers and praying for his speedy recovery and a full recovery.

Hollier also spoke of Stratton’s volunteering with PGR and standing tall for veterans.

Stratton, who owns Ace Glass & Mirror in Nederland, has served on the Nederland Chamber of Commerce board of directors and in 2017 served as chairman. Nederland Chamber President Diana LaBorde said Stratton is very interested in helping the other business people, which is one reason he loved being involved with the chamber.

LaBorde said Stratton is always the first one to volunteer to help.

“He’s the funnel cake king,” LaBorde said referring to the Chamber’s food booth during the Nederland Heritage Festival. “He’s the one who came up with the new one we’re doing this year, apple fritter funnel cake.”

Port Neches Chamber of Commerce executive director Debbie Plaia has also been touched by Stratton’s kindness. After the TPC Group explosions in Port Neches in November, Plaia had to deal with her broken windows at the chamber office. Stratton told her to go ahead and evacuate and he would board up the chamber windows and have them promptly fixed.

“He’s just a good man. You know he’s a good man when an emergency happens and you see he is all about helping others,” Plaia said. “And think about when this wreck happened, what he was doing, riding a motorcycle in the (rainy) weather. It was not stopping him from his call of duty.”

Plaia said he will have a long road to recovery but he has a lot of friends to lean on.