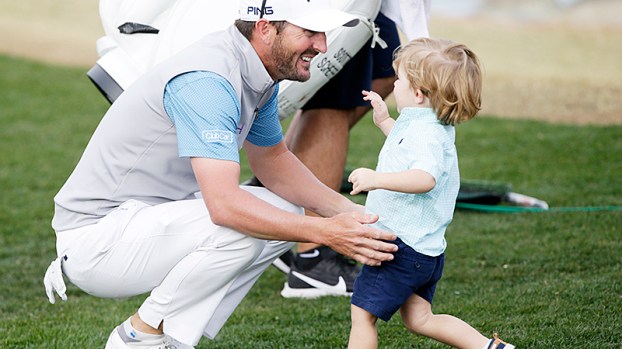 Andrew Landry took all his fans in Mid-County on an agonizing thrill ride Sunday afternoon before closing out his second PGA Tour victory in gutsy and spectacular fashion at the American Express Championship.

Up six strokes on the Stadium Course at PGA West, and seemingly on cruise control, the Port Neches-Groves ex saw the lead evaporate in stunningly swift fashion. Faced with the dreaded C word (choke), he stared it down by finishing birdie-birdie to hold off Abraham Ancer by two shots and pocket the $1.2 million top prize.

Landry wound up with a closing 67 to finish at 26-under-par 262. He was 27 under with six holes to play, then made three consecutive bogeys. By then the fast closing Ancer had caught him. When he squandered what looked to be an easy birdie on the par-5, 16th, things looked grim.

“I had good swing thoughts down the stretch and I just got the job done,” said an emotional Landry, with his wife and young son nearby. “I was swinging it well all week and putting well all week. I just had to close it out.”

He did exactly that by hitting a pressure-packed 8-iron to 6 feet, 10 inches from 166 yards on the island green 17th and making the putt. On the 18th, with water down the left side, he smashed his drive down the middle, hit a wedge to 6 feet and rolled in the birdie.

“I didn’t want to have to go to another playoff here,” said Landry, who finished tied with Jon Rahm after 72 holes two years ago. “The biggest shot of the tournament was the iron into 17. I was really comfortable on the wedge into 18. I expected it to be perfect.”

The victory, after he’d missed seven of eight cuts and five in a row, opens all kinds of doors for Landry. For openers, in a year he needed to finish in the top 125 in FedEx Cup points to keep his PGA Tour card, that worry is off the table.

Winning a tournament guarantees his card for the next two years. Beyond that, he earned a return trip to the Masters and the Tournament of Champions and he’s qualified for all the majors in 2020. He moved up to 17 in FedEx points and will make a quantum leap in the Official World Golf Rankings.

Landry also passed fellow PNG alum Chris Stroud and Port Arthur’s Marty Fleckman for most tour victories by a player from South Jefferson County. But there’s a long way to go to catch Beaumonter Bruce Lietzke, who has 13.

When Sunday’s round began, Landry was tied at 21-under with Scottie Scheffler. Rickie Fowler was the only other player within four shots. Ancer, who would author a sizzling 62, was five back.

Landry took sole possession of the lead with a par on the first hole. Birdies at 3, 6 and 7 enabled him to turn in 33 and be three shots clear of Scheffler. Then it looked like he’d landed the knockout punch with consecutive birdies at 10, 11, 12.

At that point, the only thing in question seemed to be whether he’d break Patrick Reed’s tournament record of 27 under. A three-putt bogey from 62 feet on the par 3, 13th slowed down runaway momentum. It came to a halt with somewhat sloppy bogeys on 14 and 15.

Landry, however, fought through any nerves he might have had with two booming shots to the fringe on the par 5, 16th, but failed to get up-and-down for birdie. That set the stage for the cold-blooded iron into the 17th and the follow-up birdie on 18.

When all the numbers had been totaled, Landry led the tournament in birdies with 31, was No. 1 in putts per green in regulation, No. 6 in strokes gained putting and No. 7 in greens hit in regulation. By taking 27 putts Sunday, he touched the ball with his flat stick only 99 times in 72 holes.

Landry leads in La Quinta, one round away from second career win

If Andrew Landry is able to finish off his second PGA Tour victory Sunday in the American Express Championship in... read more