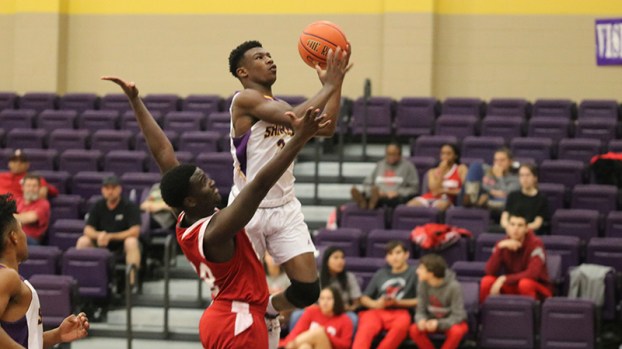 The Sabine Pass Sharks are more experienced and confident this year.

At 13-11, the Sharks already have won more games this season than the previous season, coach Chad Bryan said, and confidence is a big part of the success they’ve had so far.

The Sharks begin their district stretch on Friday hosting Hull-Daisetta (7-9) at 7:30 p.m. after the girls’ team plays the Bobcats at 6 p.m. The Sharks will be riding high from a 62-51 win against Colmesneil on Tuesday, capping some of the best basketball the Sharks have played all year, even after a long holiday break.

“Honestly, last year it was bad. We played two tournaments over the break and we just looked bad,” Bryan said. “This year we played some of the best basketball that we’ve ever played. We didn’t play at all the first week, and then we had one practice and went to the Legacy tournament and went 3-1. We actually played better over the break than we did before.”

The players might not know it, but for Bryan there will be a little bit of rivalry intensity on Friday, as he and the Bobcats’ coach Trent Wallace are good friends. Last year the Bobcats defeated the Sharks 67-25.

“We both coached track the last three years, so I’ve gotten to know him pretty well,” Bryan said. “I was texting him about the game earlier today, so there might be a little personal rivalry there, because we’re going to talk to each other after the game on the phone. I’d like to be on the winning side of that phone call, because last year I wasn’t.”

The team is looking strong. Sabine Pass played without their lead scorer, Harold James, against Colmesneil. James has averaged 21 points per game, a little less than last year’s 28 points during district, but Bryan says that doesn’t mean James has gotten rusty. It just that the rest of the team is catching up.

“We’ve just got to get it a little bit from everybody,” Bryan said. “We have to shoot it well. That’s why Tuesday everyone shot it well. I also tell them all the time we’re not going to win games on the offensive side of the court. If we get stops and we get out in transition, we can win basketball games. That’s the biggest thing, we’ve got to play defense.”