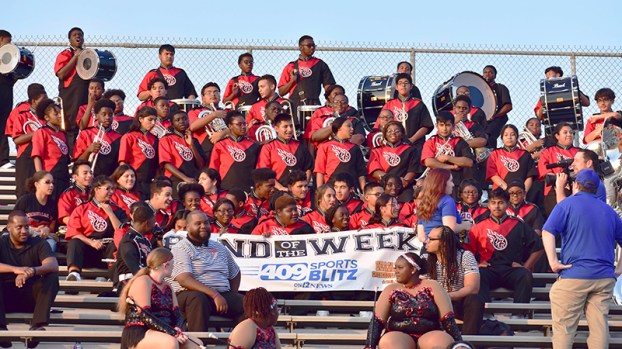 Pre-sale tickets are available until Friday at $10 or $15 at the gate. Children ages 6 and under get in free. Tickets can be purchased online via the Eventbrite app or from the Memorial High School front office.

“We do three to five competitions every fall,” he said. “But even though we do really well, a lot of our community wasn’t familiar with Battle of the Bands or how intense these competitions were. So we wanted to bring that experience here to Port Arthur.”

Battle of the Bands is a high school marching band competition where bands from all over Texas and Louisiana are invited to compete in a one-day show of competition and skill.

Collegiate judges arrive from all over the state to review the event, Frazier said. The 13 bands will be ranked among several categories such as Best Drum Majors, Best Flag and Majorette Line, Best Overall Band and more.

Bands will perform in their different divisions according to size — small, medium and large.

“By doing this showdown, these bands have an opportunity to showcase the skills that they have been working on all through football season,” Frazier said. “It’s also going to be a carnival-like atmosphere.

“We will have food vendors come out from BBQ joints to taco trucks and funnel cakes. We try to make it a really fun experience for the community, and it is something we are really proud of.”

The competition kicks off at 4 p.m. with a presentation of all bands. Memorial High School will perform first.

“We do an exhibition performance to start and get the crowd pumped up,” Frazier said. “We’re playing a little new school, a little old school and something that will keep the crowd moving in their seats.”

At the end of the event, a grand champion will be named as each band’s total score is added from 0-100. The Marching Heat band has won grand champion 11 years in a row.

PAISD Superintendent Mark Porterie is excited the Memorial Heat is again hosting the Battle of the Bands.

“The showdown gives us the opportunity to see not only our band perform, but other bands perform, which helps us become better,” he said. “We are thankful for our band instructors, and we’re excited about what we are going to see this Saturday. We are always elated to see what comes from our students.”

Frazier said he is excited for this unique event and urges the community to come out and support the band.

“We started this whole thing because we realized that the community didn’t understand how difficult it is to win a competition, but now they get to see that,” he said. “We want everybody to come out and support the band, but also to have fun.

“There is no other event like this in Southeast Texas. We have bands from all over the place that have never been here before. This is more than just your local favorites. This we’ll be a chance to witness amazing bands that we have never seen before.”

A Port Arthur man who went viral for a video showing him licking ice cream and placing the container back... read more