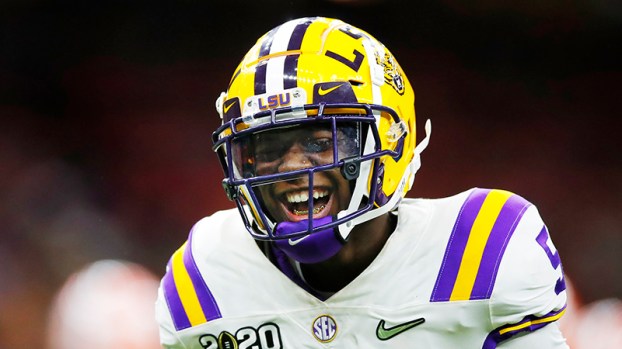 LSU nickelback Kary Vincent Jr., of Port Arthur, reacts during the second half of the College Football Playoff National Championship Game against Clemson on Monday in New Orleans. (Todd Kirkland/Icon Sportswire via AP) 1-13-20

From the time Kary Vincent Jr. and his Louisiana State University teammates reacted with surprise to the $28 million renovation of their locker room in July, the Tigers embarked on a season like none other.

Clemson (14-1) had last lost to the University of Alabama two years ago in the Sugar Bowl, played in the same venue of Monday night’s title game, New Orleans’ Mercedes-Benz Stadium.

Vincent, who went into Monday with four interceptions on the season, came close to scooping up a fifth midway through the third quarter. A pass from Clemson’s Trevor Lawrence bounced off the hands of his intended receiver and Vincent sprinted in from his nickelback position, coming just inches shy of securing the pick. 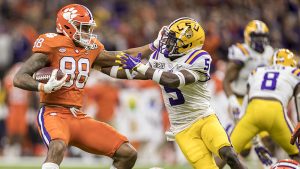 After the game, Vincent tweeted: “Call me CHAMP all 2020 !” He could not be reached for this article.

Vincent’s coach at Memorial, Kenny Harrison, said the former high school All-American trusted the process of reaching and excelling at the next level.

For a city known to produce Super Bowl-winning athletes, Vincent added his name to a list of players from Port Arthur who won major-college national championships.

The University of Texas has produced five: center Clarence Bray and end Ronny Landry in the 1963 season, linebacker Raymond Fontenot and wide receiver Charles “Cotton” Speyrer in 1969, and Jamaal Charles in 2005. Joe Washington Jr. led the University of Oklahoma to back-to-back championships in 1974-75, Jimmy Johnson coached the University of Miami to the title in 1987, Eric Alexander for LSU in 2003 and Bobby Leopold for Notre Dame in 1977.

“Port Arthur has got the best talent, I think, in any place in Texas,” said Damon West, a Port Arthur native whose motto “Be a Coffee Bean” became a theme for Clemson’s football team. “It does not surprise me that we have that many national championship winners.”

Next up for Vincent is another season of track and field at LSU. The two-time 200-meter state champion at Memorial earned All-America status in the 4×100-meter relay and has won two Southeastern Conference championships in that event.

“I’ve seen Kary run many times in high school,” Harrison said. “When people ask me how fast Kary is, I think he’s faster than anybody he runs against. I don’t know Kary knows how fast he is.

More in transition: Seahawks zero in on defense for improvement