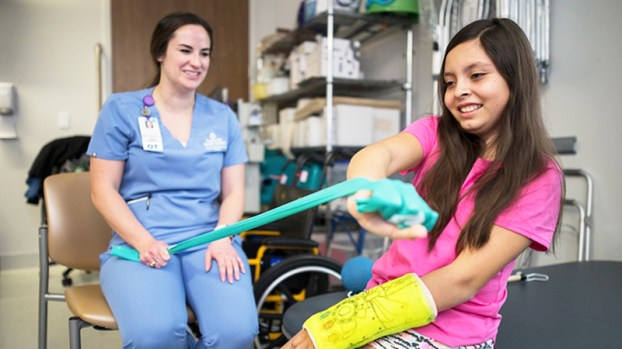 Mia Lerma, 12, spent the past month in rehab and recovery at the University Health System in San Antonio. She became the first pediatric inpatient rehabilitation warrior in the new unit. (Courtesy photo)

Husband, father and friend describe all the things that almost ended on a highway north of the United States-Mexico border. Lerma, his wife Janett and 12-year-old daughter, Mia, were hit head-on by a drunk driver coming back from a family vacation in Mexico.

“I was driving,” Miguel said. “Janett was in the passenger side, and our daughter Mia was in the back seat with our schnauzer Otis. We were going northbound and there wasn’t a divider, so when a drunk driver carrying three passengers veered into our lane going 70-75 mph, the crash was immediate. The driver died on impact, and our truck flipped.” 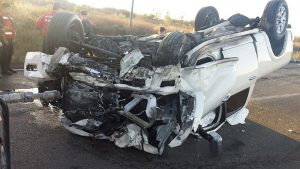 Miguel Lerma, his wife Janett and 12-year-old daughter Mia were involved in a deadly car wreck Dec. 1 where their truck flipped. (Courtesy photo)

Lerma was driving a large white Dodge Ram Truck. Miguel said his first thought as the truck flipped was, “We are about to die.”

“When I realized we were still alive and weren’t going to die, my next thought was to make sure that my girls were OK,” he said. “I heard Mia screaming in the backseat, saying ‘Daddy, Daddy, help me!’ I looked over and Janett was passed out. In that moment I couldn’t help but thank God enough that at least they were alive.”

After shaking himself out of shock, Miguel began pulling his wife and daughter out of the ruins before an ambulance and life flight arrived.

Janett and Mia were immediately flown to San Antonio University Hospital, where they were taken to the trauma unit. 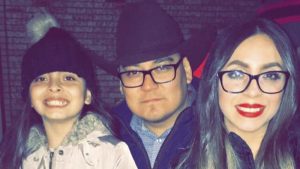 Janett suffered a broken spine, broken legs, shattered feet and fractured ribs. Mia broke her right femur, her left wrist and dislocated a hip. Miguel walked away with only minor scraps and bumps.

“It was an 11-hour surgery for Janett,” Miguel said. “Mia also went into surgery, after that they went into recovery and things started to feel like they might be alright.”

Janett and Mia spent more than a month — the entire holiday season — under the care of the University Health System, bouncing between the Trauma Unit to Surgery, to ICU and Rehab.

His family was discharged Saturday and returned home to Southeast Texas on Sunday. Miguel said he is finally happy to be home.

“We have had so much support from our community, our customers at Sylvia’s Tacos, our neighbors and from our family,” Miguel said. “To have that much support is amazing. We have people always reaching out to help in any way. I can’t say how much that has helped me mentally.” 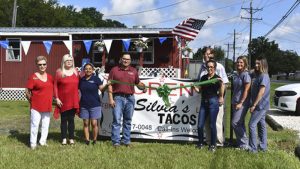 Miguel, who recently opened Silvia’s Tacos in Groves, was forced to close the business after the crash. He said he’s unsure when he will have the time and resources to reopen, but he is hoping to do so in the near future.

“It’s in the back of my mind,” he said. “We are going to reopen, but I don’t know when, hopefully, very soon.”

Mia will remain out of school for the time being. She is currently wheelchair bound but getting stronger with support and therapy. Janett is bed-ridden and will have a long rehab and recovery process. Yet, Miguel’s hopes remain high.

“I have full faith that we will recover from this,” he said. “If God didn’t have a plan for us, we wouldn’t have survived this. The hardest part is over.”

A GoFundMe account has been set up for the Lerma family. To donate visit Silvia’s Tacos Facebook page for the link.

Two auto-pedestrian collisions in the Port Arthur area over the past weekend raise concerns about the safety of walking in... read more