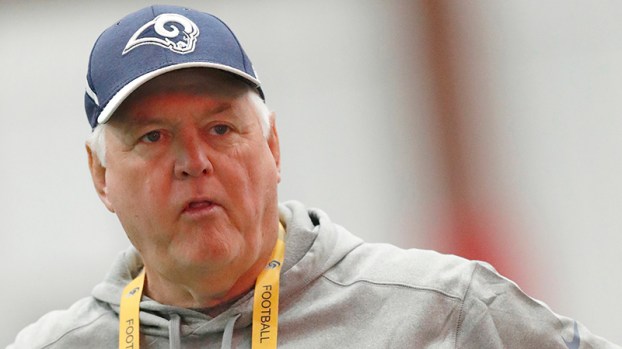 Port Neches-Groves graduate Wade Phillips announced Monday on Twitter that the Los Angeles Rams would not renew his contract as defensive coordinator.

Phillips, a longtime assistant and head coach in the NFL and son of former Houston Oilers coach Bum Phillips, helped the Rams reach Super Bowl 53 last season, but the Rams failed to return to the NFL playoffs this season despite a 9-7 record. Phillips completed his third season with the Rams.

I have been informed by the Rams that my contract will not be renewed.
I want to thank them for the opportunity to be a part of their success the last 3years. Most of all I want to thank the players who I loved workings with. I still want to coach and feel I can contribute.

“I have been informed by the Rams that my contract will not be renewed,” Phillips tweeted. “I want to thank them for the opportunity to be a part of their success the last 3 years. Most of all I want to thank the players who I loved [working] with. I still want to coach and feel I can contribute.”

It would not be unprecedented for Phillips to return to a team where he was once head coach. Phillips engineered the Denver Broncos’ defense on its way to winning Super Bowl 50 in the 2015 season, 21 years after he was the team’s head coach.

But Phillips likely won’t be headed back to Dallas, where he was the Cowboys’ head coach from 2007-10. Mike McCarthy, who has reportedly been tabbed as head coach in Dallas, is nearing landing Mike Nolan as defensive coordinator, CBSSports.com reported Monday.

McCarthy, who won a Super Bowl with the Green Bay Packers in the 2010 season, succeeds Jason Garrett, who took over the Cowboys after Phillips was fired.

The Rams went 33-15 in the past three regular seasons. Still, members of the Rams’ brass apparently felt a change had to be made on defense after not making the 2019 playoffs. The Rams’ website did not make any mention of Phillips’ job status on its website as of Monday afternoon.

Los Angeles started the 2019 season 3-0 but dropped its next three, two of them against NFC West Division rivals and playoff teams Seattle Seahawks and San Francisco 49ers. Back-to-back losses, both on the road, to the Dallas Cowboys and 49ers in Weeks 15 and 16 sealed the Rams’ fate, but Los Angeles closed out the season with a 31-24 home win over the Arizona Cardinals. The Rams finished two games behind the Seahawks.

Roschon Johnson was a quarterback for Port Neches-Groves High School just one year ago, graduating early to become a Texas... read more