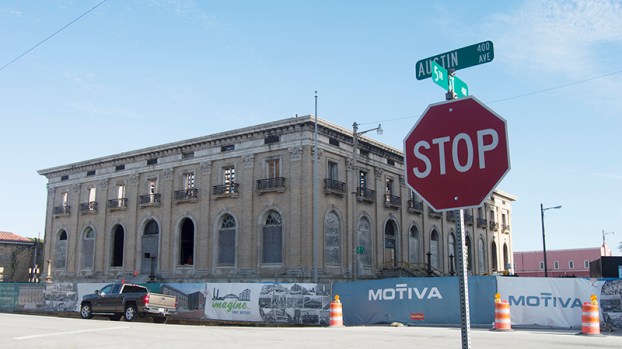 The Federal Building is part of the National Register of Historic Places, and Motiva officials said in October demolition and abatement work at the location is almost complete. (Stephen Hemelt/The News)

A new year and new decade has arrived and with it new possibilities for success, as well as the continuation of projects already in progress.

Here’s a look at some of the projects that are shaping our area:

The Federal Building — built in 1912, is the former site of the Post Office and other federal agencies; and the six-story Adams Building, built in 1926 — will be used for office workers,

Motiva announced it would sink in $10 million to renovate he Federal Building and the Adams Building, which is enough to house 500 office workers in buildings that will be composed of about 80 percent workstations and 20 percent offices.

This once vibrant part of the city has long been bare with the exception of the Health Department, city hall and the police and fire departments nearby and a spotting of businesses such as Edith’s Place, which will surely benefit from the renewed attention downtown though it is popular on its own.

With development comes the need for more. With hundreds of workers based in the downtown area, there likely will be spin-off businesses such as coffee shops and stores — but that is a wait-and-see game at this point.

Port Neches has its own boom of development with a new subdivision set to bring nearly 100 high-end homes to the Port Neches riverfront.

In July, Dinh Nguyen of LLB Construction was approved for a $1.8 million bid for 31.9 acres of riverfront property at the corner of Block Street and Lee Avenue.

The land was officially handed over to LLB Construction two weeks ago. Nguyen is set to submit master plans to the city for approval and start infrastructure work on the Neches River Estates in the new year.

In addition, Port Neches is set to get an Iguana Joe’s, a Tex-Mex restaurant with locations in Mont Belvieu, Houston, Baytown and Crosby. Current talks with the city places the eatery adjacent to the Neches River Wheelhouse.

Nederland and Groves also saw their share of good news in 2019 that will stretch into 2020. New businesses opened such as the much anticipated Judice’s 1927, Nederland Fit Body Camp and Buckstin Brewing Company in Nederland and Silvia’s Tacos and others in Groves.

New developments, new businesses and the continuation and success of established businesses in communities that are forward thinking are sure to ring in a great new year in 2020.

Mary Meaux is a reporter with The Port Arthur News. She can be reached at mary.meaux@panews.com.

PORT NECHES — Port Neches is growing, and the city has plans to accommodate its influx of residents. In July,... read more